In the Summer of Love 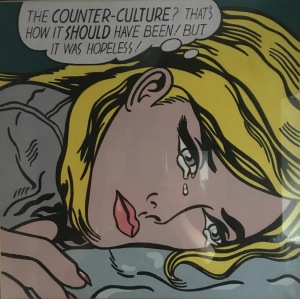 I’m looking at some 50-year-old cuttings from a morning newspaper called the Nottingham Guardian Journal. The first of them is dated Saturday, May 13, 1967. It’s from a page called The Younger Set, containing pieces on fashion and music. The reviews include Hendrix’s “The Wind Cries Mary” (“magnificent… the most creative musician in Britain today”) and Percy Sledge’s “Out of Left Field” (“reaffirms my faith in soul music”). A week later we have the Doors’ debut album (“a very cool, tight sound”), Jefferson Airplane’s “Somebody to Love” (“a very mind-blowing cut from from one of the leading new-wave groups”) and, er, Dave Dee, Dozy, Beaky, Mick and Tich (“completely moronic”).

The Guardian Journal died in 1973 and is remembered only for having been the place where Graham Greene learned the craft of sub-editing before leaving for London to join The Times. And in 1967 it carried these reviews, along with others of The Velvet Underground and Nico, Pet Sounds, Are You Experienced and Vanilla Fudge’s first album. The editor and his senior staff didn’t know much about pop music, and didn’t much like what little they knew, but they knew they had to have some of it and that there was someone in the office who was known to take an interest. That would be me, aged 20.

It was quite a year — although not, in my view, the equal of 1965 or even 1966 in terms of quality. But I wouldn’t argue with those making the case for its historic value, and now along come Harvey Kubernik and Jon Savage — two colleagues of mine from the Melody Maker in the ’70s, as it happens — to sum it up very nicely: the former in 1967 — A Complete Rock Music History of the Summer of Love , a coffee-table book containing nice photographs and a quantity of first-hand testimony, and the latter in Jon Savage’s 1967: The Year Pop Divided, a two-CD compilation of some of the year’s more interesting tracks. 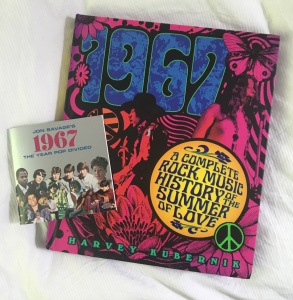 Harvey’s book moves mostly between San Francisco and Los Angeles on its journey from January to December, with detours to Monterey and London. Some of the oral history — from backroom people like Andrew Loog Oldham, Shel Talmy and Bones Howe as well as stars such as Jerry Garcia, Al Kooper and Carlos Santana — is of rich in opinion and anecdote, despite being mostly divided into bite-sized chunks and arranged around the visual material. There are some real gems, as when the actress Peggy Lipton, one of the great beauties of the time, tells Kubernik about her Monterey Pop Festival experience: “There was a light drizzle and we went to hear Ravi Shankar. I remember I left my body.”

It makes a nice companion to two other oral histories, Jonathon Green’s epic Days in the Life and Barry Miles’s In the Sixties, which tell the story of the era from the British perspective. (The Roy Lichtenstein pastiche at the top of this piece accompanied the publication of an extract from Days in the Life in The Times on the book’s original appearance as a hard-back in 1988; it was commissioned jointly by me and the paper’s then art director, David Driver.)

Among the 48 tracks on Jon Savage’s meticulously compiled and annotated CDs are some unexpected psychedelic gems and curios, such as the Marmalade’s “I See the Rain”, Tintern Abbey’s “Vacuum Cleaner” and the Third Bardo’s “I’m Five Years Ahead of My Time”. The more obvious choices include the Byrds’ “So You Want to Be a Rock ‘n’ Roll Star”, Captain Beefheart’s “Yellow Brick Road”, Sonny and Cher’s “The Beat Goes On” and the Buffalo Springfield’s “Mr Soul”. There are several fine examples of soul music fighting back with Joe Tex’s “Show Me”, James Brown’s “Cold Sweat Pt 1”, the Bar-Kays’ “Soul Finger”, the Four Tops’ “You Keep Running Away” and Aretha’s “Respect” and “Chain of Fools”.

So there was certainly plenty going on in 1967, and not just in the obvious places. A very minor example: in Nottingham, a friend of mine organised a Freak Out at the Co-operative Arts Centre, with the Social Deviants on stage, Scorpio Rising projected on the wall, and a bubble machine. The young Paul Smith accepted 25 shillings to make me a blue kaftan for the occasion, with floral trim and armholes so tight that I couldn’t move my upper limbs; not much good for letting it all hang out, never mind leaving your body.

In this morning’s Observer magazine, five participants in San Francisco’s Summer of Love were invited to reflect on its significance. Peter Coyote, a co-founder of the “anarchist gang” (his phrase) known as the Diggers, comes up with an interesting verdict: “The counter-culture may have lost every political battle — we didn’t end racism, we didn’t end war, we didn’t end capitalism, we didn’t end imperialism. But on a cultural level, we won every single battle. There’s no place today in the western world where there’s not an organic food movement, a women’s movement, and environmental movement.”

I’m pretty sure that I never left my body at all during 1967, but then I never got to listen to Ravi Shankar in a light drizzle with Peggy Lipton.

* Jon Savage’s 1967: The Year that Pop Divided is out now on Ace Records. Harvey Kubernik’s 1967: A Complete Rock Music History of the Summer of Love is published by Sterling Books.