At last, Eurovision finds a song 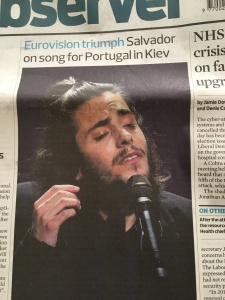 A rather extraordinary thing happened at the Eurovision Song Contest in Kyiv last night. Amid the overheated cavalcade of stadium-rock effects and terrible English lyrics, a young man in a shapeless black suit and a dark shirt, his long hair tied up in an untidy top-knot, stood along on an unadorned stage and just sang a song in Portuguese, accompanied by a piano and a small group of strings. A very lovely song, a graceful ballad with a shapely tune, delivered in a high and gentle voice that managed to convey the ardour of the lyric without pushing the buttons that tend to fall automatically under a singer’s fingers on such occasions. And the song won the contest, carrying the votes both of the juries around Europe and of the audience at home.

Salvador Sobral’s song was called “Amor Pelos Dois” (“Love for Both of Us”) and was written by his sister, Luísa. When invited up to receive the award, Salvador said this: “We live in a world of disposable music. Music is not fireworks. Music is feeling.” Quite brave, that, to deliver a rebuke to the contest you have just won. Then, when he performed the song again, he invited his sister to share the microphone, and they alternated lines.

This was the first time Portugal had won the contest in 53 years of trying. How marvellous that they should do it with a song and a performance true to the finest traditions of the country’s popular music. Next year, when Lisbon hosts the event, some of the contestants might find the time to visit not only the fado bars in the Bairro Alto but also the exceptionally fine Museo do Fado in Alfama, where they will learn a lot about the value of music that reaches the heart without the use of fireworks.