Posts from the ‘Mod’ Category

I found this flyer the other day in a box of old stuff. It’s from 1963, and it reminds me of a few things. The first is that this Roland Kirk concert was in Nottingham and not in Leicester, as I wrote in an earlier piece (now corrected). The second is that his tour was organised by Ronnie Scott’s, where he had been performing. The third is that there were some interesting musicians to be seen and heard that night.

Stan Tracey was the house pianist at Ronnie’s, then still located in Gerrard Street, from 1960 to 1967, by which time it had moved to Frith Street. After a sticky patch in the ’70s he went on to a long and distinguished career as a composer and bandleader, leading to the award of an CBE in 2008, five years before his death at 86.

Malcolm Cecil was an excellent bassist (and early member of Alexis Korner’s Blues Incorporated) who migrated to the USA, took an interest in synthesisers, and palled up with Bob Margouleff, a man of similar instincts. Together, as Tonto’s Expanding Head Band, they released Zero Time in 1971 before going on to provide the crucial synthesiser expertise on Stevie Wonder’s Music of My Mind, Innervisions and Fulfillingness’ First Finale, thus helping to shape the direction of music in the 1970s and beyond.

Johnny Butts was a very fine drummer who played with the Emcee Five in Newcastle (alongside Ian and Mike Carr) before moving to London and contributing to the groups of Ronnie Ross, Humphrey Lyttelton, Tony Coe, Dick Morrissey and Gordon Beck, and the Tubby Hayes Big Band. He died in a road accident in Bermuda in 1966, aged 25.

Brian Auger was a useful young bebop pianist with Tommy Whittle and others before switching to the Hammond organ in the year he made this tour with Kirk. In 1965 the Brian Auger Trinity was joined by Julie Driscoll, Rod Stewart and Long John Baldry to form the Steam Packet, a very fine live band who never had a proper recording session. The Driscoll/Auger version of “This Wheel’s on Fire”, a Bob Dylan/Rick Danko composition circulated on the original Basement Tapes publisher’s acetates, is on anyone’s list of great ’60 singles. Later Auger formed Oblivion Express and moved to California, where he still lives, aged 80.

Irish-born Rick Laird had left Australia for London in 1962 to study at the Guildhall School of Music and quickly became a first-choice bass player on the London scene, playing with many visiting Americans at the Scott Club. In 1966 he won a scholarship to the Berklee School in Boston, played with Buddy Rich’s big band, and switched to bass guitar. In 1971 he was recruited by John McLaughlin to help form the Mahavishnu Orchestra, with whom he toured and recorded. Later he toured with Stan Getz and Chick Corea. More recently he has taught bass and pursued a second career as a photographer.

Phil Kinorra was a 20-year-old drummer whose nom de batterie was made up, in a touching display of hero-worship, of bits of the names of three of London’s finest modern jazz drummers of the time: Phil Seaman, Tony Kinsey and Bobby Orr. His real name was Robert Anson, he was born in Nottingham (so this gig was a return home), and he also appeared alongside Graham Bond and Johnny Burch on Don Rendell’s wildly exciting 1963 Jazzland LP, Roarin’. In the mid-’60s he adopted a new identity and led a mod-soul band called Julian Covey and the Machine, who recorded “A Little Bit Hurt” for Island in 1967 and whose constantly shifting personnel included the organist Vincent Crane (later of Arthur Brown’s band and Atomic Rooster), the guitarists Jim Cregan, Dave Mason and John Morshead, the ill-fated bassist Cliff Barton and the definitely not ill-fated bassist John McVie, and the saxophonist and flautist Bob Downes. When psychedelia beckoned, Anson/Kinorra/Covey metamorphosed into Philamore Lincoln, writing “Temma Harbour”, recorded by Mary Hopkin as the second follow-up to “Those Were the Days” in 1969, and releasing The North Wind Blew South, an album of what would now be called Sunshine Pop, on Epic in 1970. He left the music business later in that decade and seems never to have returned.

Quite a lot of history for one tatty bit of paper, which I stuck up on my bedroom wall as a 16-year-old and then carried around from place to place, from one life to another, for almost six decades. 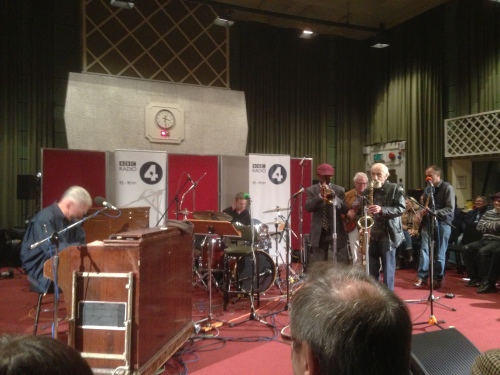 Climbing the stairs from the basement of BBC’s Maida Vale studios yesterday, it was a shock to emerge into bright autumn sunshine. Just like coming out of an all-nighter 50 years ago, in fact. “Don’t forget to grab a pint of milk for the journey home,” a fellow member of the audience said, remembering old rituals. The actual time was five o’clock in the afternoon, but the illusion was understandable. Downstairs we had just spent two hours in the company of Georgie Fame, reliving the night he made his first album, Rhythm and Blues at the Flamingo, back in September 1963, for the benefit of Radio 4’s Mastertapes series.

As you can see from the photograph above, the old studio provided a period setting — although not much resembling the basement on Wardour Street that was Fame’s headquarters. Quite a lot like the settings for his occasional BBC broadcasts from that era, however. And it was certainly a period audience: a large majority of the 200 or so looked as though they could remember the sense of mingled delight and disappointment when “Yeh Yeh” knocked the Beatles off the top of the charts, turning Fame overnight from a cherished cult hero to a star of mainstream pop.

Georgie turned up for the gig with the two men who have been his travelling guitarist and drummer for many years, his sons Tristan and James Powell, thus recreating the old Jimmy Smith line-up, in which the organist uses his pedals to supply the bass line. The surprise was the presence of three comrades from the early editions of the Blue Flames: the trumpeter Eddie “Tan Tan” Thornton, the tenor saxophonist Mick Eve and the guitarist Colin Green.

Together they played a nice version of “Humpty Dumpty”, the ska tune from the Flamingo album. Only Eve had been present on the original recording. Tan Tan was probably playing his regular gig at the Blue Angel in Mayfair that night and Green had, as Fame put it, temporarily opted for a quiet life in Switzerland playing with Eddie Calvert. John McLaughlin, Green’s replacement, was otherwise engaged, so Big Jim Sullivan was brought in at short notice. The great conga player Speedy Acquaye was “detained at Her Majesty’s pleasure” (again in Fame’s words) at the time, and replaced for the night by Tommy Thomas, who played bongos — not the same thing at all. The album, Fame explained, had not been truly representative of the band’s sound.

But it was nice to hear him and his sons as they worked their way through tight versions of “Eso Beso” and Nat Adderley’s “Work Song”, with its Oscar Brown Jr lyric. “Green Onions” didn’t appear until the next album, Fame at Last, but was played in tribute to the inspiration provided by Booker T and the MGs. Fame’s answers to questions from the programme’s presenter, John Wilson, and members of the audience elicited some fascinating stories about hot nights at the Flamingo, including the volatile relationship between three regulars: Lucky Gordon, Johnny Edgecombe and Christine Keeler.

An extra touch of authenticity was provided by the presence of Johnny Gunnell, who, with his late brother Rik, ran the Flamingo all-nighters and managed the early stages of Fame’s career. We had a chat, during which he gave me an unexpected story. It began with him leaving school in his early teens and landing a job as a trainee journalist at the Church Times, of all places, reporting on ecclesiastical matters. He spent four years there, learning the craft skills; when called up for National Service in 1958, his knowledge of shorthand won him a desk job in an Army office in the West End, which was a whole lot better than being posted to Aden or the Rhineland. Working 9 to 5 in central London and earning £20 a week (“from the Army!”), he was able to spend his nights in clubland. I couldn’t help but be amused by the idea of such a significant figure of the Soho demi-monde having served his apprenticeship on the weekly newspaper of the Church of England.

When yesterday’s recording began, Gunnell was handed the microphone and invited to introduce the reunited Blue Flames. He asked the audience for “a big Flamingo welcome”. He got it.

* Georgie Fame’s Mastertapes will be broadcast on BBC Radio 4 in December, in two hour-long episodes. A new five-CD box of his early recordings, titled The Whole World’s Shaking, and including his first four albums plus rarities, BBC sessions and unreleased material, is released by Universal on October 9.