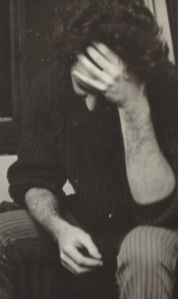 Jesse Winchester died today, April 11, five weeks short of his 70th birthday, at his home in Charlottesville, Virginia. He had been suffering from oesophageal cancer. The most soulful of singer-songwriters, he was held in high esteem by his peers. When some of them tried to lighten the burden of his long illness by making an album of his songs, the cast included Lucinda Williams, Lyle Lovett, Allen Toussaint, Rosanne Cash, Vince Gill, Jimmy Buffett, Elvis Costello, James Taylor and Rodney Crowell.

His first solo album, Jesse Winchester, was a very hip one to own back in 1970. Produced by Robbie Robertson for Albert Grossman’s Bearsville label and released on the poorly distributed Ampex imprint, it contained beautifully unadorned versions of such fine songs as “Payday”, “The Brand New Tennessee Waltz”, “Quiet About It” and “Rosy Shy”, and a gatefold cover featuring the same stark sepia portrait repeated on each of the four surfaces. It was followed by Third Down, 110 to Go, then Learn to Love It, and Let the Rough Side Drag, each of which brought more great songs, like “Isn’t That So?”, “All of Your Stories”, “Mississippi, You’re on My Mind”, “Defying Gravity”, and “It Takes More Than a Hammer and Nails to Make a House a Home”. Amos Garrett’s guitar was heavily featured, notably on the wonderful cover of Russell Smith’s classic “Third-Rate Romance”.

Born in Lousiana and brought up in Memphis, Tennessee, Winchester fled the draft in 1967, fetching up in Montreal, where his career began. Not until Jimmy Carter declared an amnesty 10 years later was he able to perform in the US. Here’s how he sounded then, singing “Yankee Lady” at the Bijou Cafe in Philadelphia that year. And here are some words of his, written at the start of his exile, that seem specially appropriate: “Have all of your passionate violins / Play a tune for a Tennessee kid / Who’s feeling like leaving another town / With no place to go if he did / But they’ll catch you wherever you’re hid…”

* The photograph of Jesse Winchester is from the cover of Third Down, 110 to Go and was taken by Henri Dupond.