Posts tagged ‘Martha and the Vandellas’ 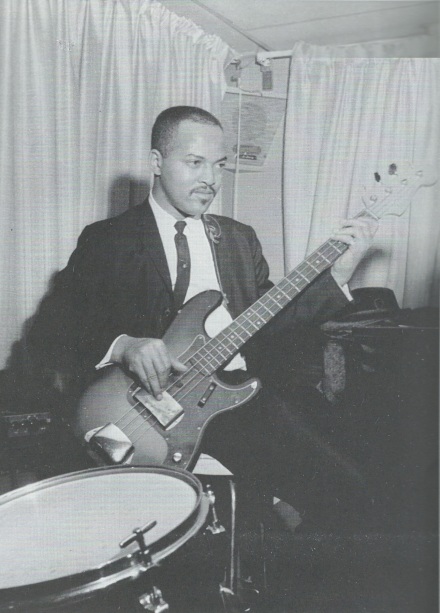 You don’t need me to tell you about James Jamerson, the first of the Motown session musicians to be recognised for his outstanding individual contribution to the Sound of Young America. It was Jamerson who revolutionised the use of the bass guitar in popular music, yanking it away from a restricted role by creating the mobile, often melody-rich lines that got us dancing to Marvin Gaye’s “Ain’t That Peculiar”, Kim Weston’s “Take Me in Your Arms (Rock Me a Little While)”, the Supremes’ “Love is Here (And Now You’re Gone)”, the Four Tops’ “Reach Out, I’ll Be There”, Jr Walker’s “(I’m a) Road Runner”, the Isley Brothers’ “Tell Me It’s a Rumour, Baby”, the Temptations’ “(I Know) I’m Losing You”, Barbara Randolph’s “I Got a Feeling” and so many others (those eight tracks comprise just a rather obvious selection of my own particular favourites from the golden age of Hitsville USA).

Every now and then a previously hidden gem of Jamerson’s art emerges, and one such is to be heard on Finders Keepers: Motown Girls 1961-67, a compilation of hitherto unconsidered trifles put together by Keith Hughes and Mick Patrick for Ace Records. Containing non-hit tracks by such luckless thrushes as LaBrenda Ben, Hattie Littles, Carolyn Crawford, Anita Knorl, Linda Griner, Thelma Brown and Liz Lands as well as rejected tracks by the hit-making Supremes, Gladys Knight and the Pips, Brenda Holloway, the Marvelettes, the Velvelettes and the Miracles (with Claudette Rogers singing lead), it is not, one has to say, an absolutely essential purchase. Although there are a handful of genuine highlights, notably the Velvelettes’ Northern beauty “Let Love Live (A Little Bit Longer)” and the one well-known track, Mary Wells’ “What’s Easy For Two”, in general the selection confirms the shrewdness of Gordy’s quality control department, whose stern judges assessed songs for single or album release.

But there is one moment which more than justifies the album’s existence, and that moment is “No More Tear Stained Make Up”, a Smokey Robinson song recorded by Martha and the Vandellas in 1966 and previously released only on their LP of the same year, Watchout!, where it languished until this resurrection. I confess that I never noticed the special quality of this song, which resides chiefly in the fact that it functions as a vehicle for some of Jamerson’s most inventive playing

Some may also enjoy Smokey’s lyric: “I’ve had no use to wear a / Pair of lashes or mascara / And my eyes have natural shadows from the crying / That I’ve done so much of lately / Cos it really hurt me greatly / When I found the love you vowed was only lying…” I’m certainly among them, particularly for the “to wear a”/”mascara” rhyme. But the true beauty of the track is the way Jamerson exploits the cool medium-paced swing of the rhythm — not unlike the airy, hip-swivelling groove of the Miracles’ “I Like It Like That” from two years earlier — with what amounts to a running commentary on the top line and the chord changes, exposing his wonderful instinct for the best way to embellish a simple song without cluttering or overwhelming it.

Born in 1936, Jamerson learnt to play the double bass while a pupil at Detroit’s Northwestern High School and spent the early years of his career playing with jazz groups. He switched to the electric instrument in 1961, at just about the time he was starting to work in the Motown studio, but on many of his recordings you can hear the influence of his grounding in jazz in the fluency of his double-time fills and run-ups, the passing notes, the register leaps, a willingness to add syncopation through the use of rests, and — on a track like this — the ability to “walk” a 4/4 rhythm. There are even times on some of the early Motown tracks, such as “A Love Like Yours (Don’t Come Knocking Everyday)”, the B-side of Martha and the Vandellas’ “Heat Wave”, recorded in 1963, when it sounds as though he was still using the upright instrument. And listen to him on the Supremes’ magnificent “Love Is Here (And Now You’re Gone)” from 1966, how he reshapes what must have begun life as a basic four-on-the-floor stomper with leaping triplet-based figures and a lovely, almost acoustic tone that would not have shamed Charles Mingus.

I wish I had the skill and patience to transcribe his playing on “No More Tear Stained Make Up”. Ranging up and down the stave and across the bar-lines, it would probably look as beautiful as it sounds.

* The photograph is taken from Standing in the Shadows of Motown: The Life and Music of the Legendary Bassist James Jamerson, the self-published book by Dr Licks (Allan Slutsky) which first appeared in 1989 and sparked the interest that led to a Grammy-winning documentary film in 2002 and the highly successful reunion tours of the Funk Brothers, as the Motown session men called themselves — too late, alas, for Jamerson, who died in 1983, aged 47.