A night with Mississippi Records 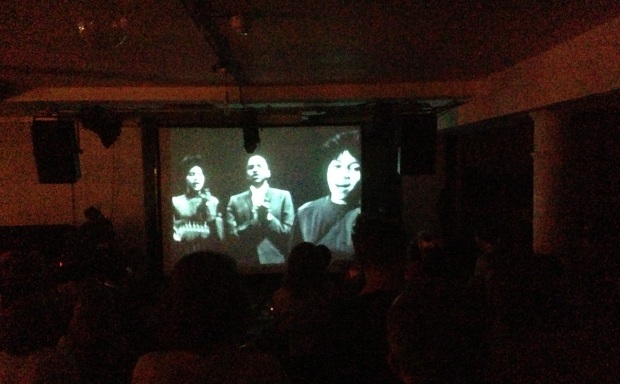 Eric Isaacson lives in Portland, Oregon, where he founded Mississippi Records in 2003, releasing vinyl LPs that anthologised pieces of music from some of the thousands of 78s he had been collecting, building up a picture of vernacular music during the first half-century of recorded sound. As a child, he had created his own Beatles LPs on tape by copying down the running order of each album and recording every track off the radio on cassette before dubbing them into the correct sequence. That occupied him between the ages of seven and 10. After that, he never looked back. Or perhaps that’s not quite the right way to put it.

He was the host of an event at the Cafe Oto in London last night, presenting three of the artists featured on his label: the singer and guitarist Brian Mumford, performing as Dragging an Ox Through Water, the cellist Lori Goldston, who toured with Nirvana in the year before Kurt Cobain’s death, and the lap-steel player Marisa Anderson. But he opened the evening with an illustrated talk titled “A Cosmic and Earthly History of Recorded Music According to Mississippi Records”.

A man of strong opinions, who doesn’t like saxophone solos and thinks that “very little good music” was recorded between 1933 and 1952, in other words between the depths of the Great Depression and the heyday of Moe Asch’s Folkways label, he proved entertaining company. After playing sounds alleged to be those of a dying star and of the potter’s grooves inscribed in a Grecian urn, he reminded us of the epidemic of “laughing” records that proved popular in the 1890s, a phenomenon which survived at least into the 1950s, when I remember listening to Children’s Favourites, the BBC Light Programme’s Saturday-morning show, in the hope that it would feature “The Laughing Policeman”.

The centrepiece of Isaacson’s address came in a 20-minute collage of film clips edited from his own collection, illustrating African American music more or less in the raw. It began with wonderful footage of the Staple Singers (pictured above), with the teenaged Mavis in staggering form, and included bits of Bo Diddley, street and church singers, the Ronettes, James Brown, Sister Rosetta Tharpe and Claude Jeter with the Swan Silvertones before climaxing with Mahalia Jackson singing “Trouble of the World” in front of a congregation including Lana Turner and Sandra Dee during the funeral scene from Douglas Sirk’s 1959 melodrama Imitation of Life. He added with a clip of Nina Simone in riveting free-association mode at the Montreux Jazz Festival (you can find it here, from 37:30 to 44.40).

Of the live performers, I was taken by Lori Goldston’s powerful arco pieces, all skirling double and triple stops, her cello run through a Fender Twin amp, and the way her more delicate pizzicato work made the instrument sound like an oud. Brian Mumford/Dragging an Ox Through Water performed in the dark, without stage lighting, and made me think of what the late guitar visionary Sandy Bull might have sounded like, had he been subjected to the influence of Suicide and Metal Machine Music: tremulous rockabilly vocals completely masked by distortion, heavily reverbed chords bleeding into each other at high volume, a seemingly arbitrary but nonetheless dramatic sense of structure.

The danger is that such music becomes merely picturesque, no more than the sum of its references. Goldston and Mumford get beyond that. But Mavis Staples, Mahalia Jackson and Nina Simone: those are hard acts to follow.