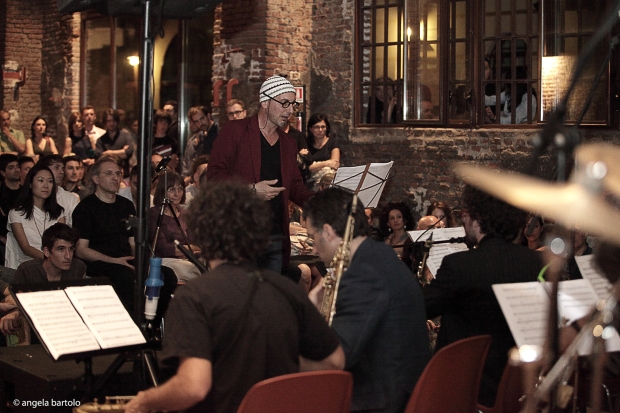 If you happen to be in Italy, and you get a move on, you can probably still buy the September issue of the monthly magazine Musica Jazz, which has a cover-mounted CD: Ferdinando Faraò & Artchipel Orchestra Play Soft Machine. For several reasons, this is a good thing to own.

Faraò set up the orchestra four years ago, with an unusual mission: to reinterpret the work of British jazz and jazz-rock composers of the late 1960s and early 1970s. After making a start on Mike Westbrook, Fred Frith, Dave Stewart and Alan Gowen, he moved on to the Soft Machine. Most recently, in June, the orchestra’s guests at the Fasano festival were Keith and Julie Tippetts. Their leader obviously sees something he likes in the music being made in London during an all too brief era when young rock and jazz musicians worked freely together and anything seemed possible.

The CD that comes with Musica Jazz concentrates in particular on the compositions of the late Hugh Hopper, the Softs’ bass guitarist from 1968 to 1973. Five of Hopper’s tunes — “Facelift”, “Kings and Queens”, “Noisette”, “Dedicated to You But You Weren’t Listening” and “Moustrap” — are among the seven tracks on the 55-minute CD, which was recorded in a Milan studio last December. The other two are Faraò’s “Facelift: Prelude”, an atmospheric introduction to the set , and Robert Wyatt’s classic “Moon in June”, concluding the album in a loose but well organised interpretation featuring Filippo Pascuzzi and Serena Ferrara, two of the ensemble’s four singers.

Faraò and his fellow arranger, Beppe Barbera, aren’t making carbon copies of the originals here. They’re devising revisions that bring unusual resources to bear on the material, exposing facets of beauty that we might not have imagined to be present, even in embryo. To “Kings and Queens”, first heard on Soft Machine’s 4 in 1971, they bring the vocal quartet, a bass riff doubled by Simone Mauri’s bass clarinet, and colouristic interventions by Flavio Minardo’s sitar, Eloisa Manera’s violin and Paolo Botti’s viola. “Dedicated to You…”, which dates from 1969, is successfully rearranged for acapella voices in a treatment inspired by the Delta Saxophone Quartet’s version.

This band has improvisers of substance, too, as we learn from the thoughtful contributions of Germano Zenga’s tenor saxophone, Felice Clemente’s soprano and in particular Massimo Falascone’s unaccompanied alto on an expansive reading of “Noisette”, which Hopper wrote in 1969 and which first appeared on the Softs’ Third in 1970.

I’ve been listening recently listening to Hopper’s solo album, 1984 (released in 1973), and to Canterburied Sounds, the four-CD set of archive material recorded between 1962 and 1972 in mostly informal situations by the various early members of the Softs, and released in full last on the Floating World label. The Artchipel Orchestra’s album presents another perspective on the work of a fascinating musician, and deserves a proper commercial release.

(Addendum: See Alessandro’s reply for information on how to get hold of the relevant issue of Musica Jazz.)

* The photograph of Ferdinando Faraò and the Artchipel Orchestra was taken by Angela Bartolo at the Ah Um festival in Milan in 2011 and is taken from the band’s website: https://sites.google.com/site/artchipelorchestra/