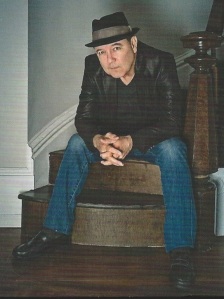 Rubén Blades is one of the most interesting survivors of the salsa explosion of the 1970s. Born in Panama City in 1948, the son of a Cuban mother and a Colombian father, he moved to New York in his mid-twenties, joining Jerry Masucci’s stable of emerging stars at Fania Records, he had started work in the classic manner, with a job in the company’s mail room.

Barely on the radar at the time I was trying to get a British audience interested in salsa via a couple of Island compilations of Fania material in the mid-’70s, he would soon be enjoying success via collaborations with Larry Harlow, Ray Barretto and Willie Colón, and through regular appearances with the the hugely popular Fania All-Stars. His song “El Cantante”, recorded by the brilliant but ill-fated Hector Lavoe, became a massive hit, and his 1978 album with Colón, Siembra, was for a while the most successful album in the history of salsa, said to have sold 25 million copies.

With a great-uncle who had fought against Spain in Cuba’s war of liberation, Blades’ compositions often displayed a strong political consciousness. In 1984 the A&R people at Elektra Records saw his potential to reach a wider audience. Soon after moving from Fania to his new home he recorded Escenas, with a new band called Seis del Solar, winning a Grammy for best Latin album. There was another one in 1988 for Antecedente, one my favourite albums of that decade.

While making these records he followed up his law degree from the University of Panama with a masters from Harvard. He also pursued an acting career, appearing in Robert Redford’s The Milagro Beanfield War, Spike Lee’s Mo’ Better Blues, and several other films. In 1994 he stood for the presidency of Panama, winning 18 per cent of the vote, and 10 years later he served a term as the country’s minister of tourism.

But he never stopped making music, and now he has released a new album, which sees him exploring the music of one of the countries of Latin American with which he does not, so far as I know, have ties of blood. Tangos consists of well known Blades songs recast in the Argentinian idiom by the arranger and conductor Carlos Franzetti, using a variety of means: a group of four bandoneon players accompanied by a string orchestra, a classic tango nuevo quintet (à la Astor Piazzolla), and the City of Prague Symphony Orchestra.

Familiar pieces such as “Juana Mayo”, “Pablo Pueblo” and “Pedro Navaja” fit perfectly into this new format. “Perhaps these tunes were always tangos,” Franzetti remarks in his brief sleeve note. In some cases, like gorgeous opening “Paula C” and closing “Tiempos”, they gain in drama from the elegant orchestrations, which inspire Blades to a series of exceptional vocal performances, his tone and phrasing beautifully controlled. Almost 80 years after the great Carlos Gardel died in an air crash in Medellín, Rubén Blades unexpectedly presents himself as a thoroughly credible heir.

* The photograph of Rubén Blades is taken from the cover of Tangos and was taken by Vincent Soyez.