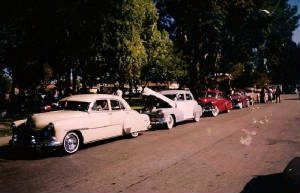 Don’t we all have semi-mythical places and cultures of which we’d like to have been a part? One of mine is East LA, and the Chicano culture of soul music and cars. I probably caught the obsession from listening to the two best records Frank Zappa ever made: “Memories of El Monte” by the Penguins and Cruisin’ with Ruben and the Jets.

This is Lowrider Soul is an Ace/Kent compilation of the music enjoyed by the current generation of Mexican Americans who take old cars and customise them in a particular style, starting by dropping the suspension. I’m not going to go any further into the automotive side of it. All I need to say is that, to judge from this CD, they have immaculate taste in music.

There are 24 tracks here, put together by Sean Hampsey, all dating from 1962-70, and I’d heard only three of them before. For me, it’s a treasury of brilliant discoveries, unified by mood: these are slow jams from the moment when doo-wop morphed into soul. Mostly pleading and woebegone, they’re wrenching and transcendent in the way the best soul music always has been.

There’s a strong possibility that you’re familiar with “It’s Not That Easy” by Reuben Bell with the Casanovas, since it was on Vol 1 of Dave Godin’s classic Deep Soul Treasures series a few years ago. I already knew the two sides taken from the Stax/Volt catalogue: William Bell’s “Crying All By Myself” and the Charmels’ “As Long As I’ve Got You”, a Hayes/Porter ballad that is high on my all-time girl-group chart. But I didn’t know “Shattered Dreams” by the Endeavours, or “As I Sit Here” by the Whispers (cut well before their great run of ’70s hits), Barbara Mason’s “Oh How It Hurts” (a beautiful follow-up to “Yes I’m Ready”), Brenton Wood’s “Where Were You” or the glorious “Why’d You Put Me On” by Bobbi Row and the Englishmen, an outlandish alias for the great Don Julian and the Meadowlarks. Or the rest, most of them from obscure labels such as Popside, Double Shot and Chant, as well as better known soul houses like Atco, Doré, Arctic and Kent. It makes you wonder whether that the great well of soul obscurities is ever going to run dry.

So in this dream I’m in a maroon ’49 Mercury lead sled, chopped, channeled and lowered, heading east down Pomona Blvd towards El Monte Legion Stadium, away from the neon sunset. And on top of the growl from the car’s flathead V8, This is Lowrider Soul is the soundtrack.