Bob Dylan in his own write 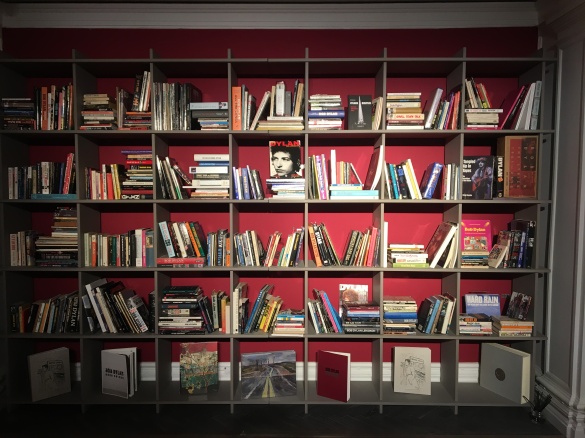 I chuckled when I saw these bookshelves, installed on the stairwell of the Halcyon Gallery on Bond Street, accompanying an exhibition called Mondo Scripto: Lyrics and Drawings by Bob Dylan. Here is what appears to be just about every book ever written in English about Dylan, including my own extremely modest and inessential effort. The realisation of how many of these volumes are on my shelves made me pause for a moment to think about life’s priorities.

Anyway, the exhibition’s raison d’être is a new series of 52 handwritten lyrics, each framed with an accompanying pencil drawing. I happen to have a fondness for Dylan’s oil paintings, without feeling the need to make any great claims for them, but these sketches are extremely rudimentary. It’s the juxtapositions that make them interesting to a fan. Sometimes they’re surprisingly literal: a young woman behind bars with “I Shall Be Released”, a tank with “Masters of War”, a man alone high on a ridge with “One Cup of Coffee (Valley Below)”. Elsewhere any hint of shared meaning is, shall we say, elusive: a collapsed building with “Forever Young”, a sketch of a Chicago Cubs pitcher with “Hurricane” (which is, of course, about a boxer), a portrait of Jack Nicholson as the Joker with “All Along the Watchtower”.

A photograph on a wall shows Dylan, pen in hand, writing out one of the lyrics (they’re all inscribed on headed notepaper from something called the Black Buffalo on State Street in Dayton, Ohio, which — like the Abernathy Building, where he made his Theme Time Radio programmes — turns out not to exist). So I guess he did write them all himself, the calligraphy varying in a way that, like the occasional crossing-out, would probably be beyond currently available algorithms.

Personally, I’m moved by the sight of the words to “It’s Alright Ma” written out by their author. Or the third-person version of the “Tangled Up In Blue” lyric. The songs from Blood on the Tracks, in fact, are all treated to some fairly radical revision: apart from the first seven words and the title, this written version of “You’re Gonna Make Me Lonesome When You Go” contains nothing from the original recording. 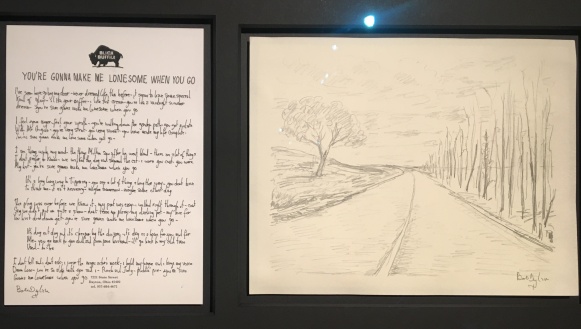 No doubt somebody will tell me that it’s from one of the outtakes on More Blood, More Tracks, the latest volume in the Bootleg Series, in which I have yet to invest — partly because the terrible early version of “Your Gonna Make Me Lonesome” that I heard during a playback session a few months ago came close to destroying what is probably my favourite of all Dylan’s songs and put me off the idea of buying the £100 deluxe edition altogether. But it was enjoyable to read these verses to myself, with the melody and Dylan’s voice in my head.

The exhibition also features some of his iron sculptures, created by welding together old farmyard tools and bits of tractors (or possibly new ones: it’s hard to tell, since they’re all dipped in a thick paint). I got a lot of fun out of overhearing a member of the gallery’s staff, a smart young man in a suit and tie, trying to explain them to a potential buyer. Not a job I’d want to have.

* Mondo Scripto is at the Halcyon Gallery at 144-146 Bond Street, London W1S 2PF, until December 23. For those who might be interested, 10 of the lyrics/sketches are available as individual prints in editions of 495 at £1,500 unframed and £1,895 framed. Originals apparently start at close to £100K. Black Buffalo Ironworks seems to be the name of his metal sculpture project, but it’s not based in Dayton, Ohio, as far as I can tell. About the books, the gallery will tell me only that they are the property of a collector.