George Martin’s Day in the Life 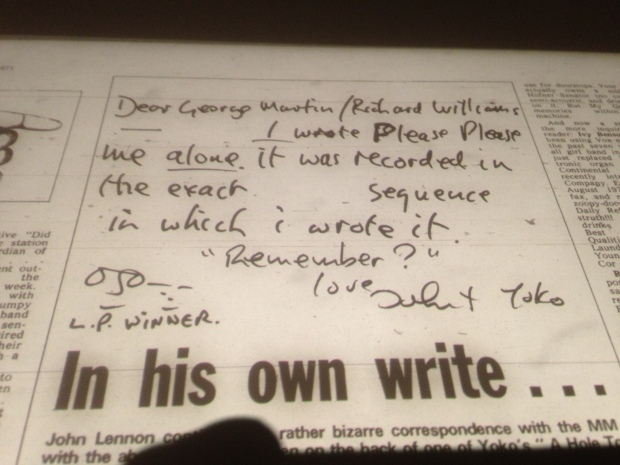 Forty five summers ago, George Martin granted me a long interview for the Melody Maker. It was a very enjoyable experience: he was most courteous of men, and his answers were full of fascinating detail, with the occasional gentle indiscretion. He spoke in some depth about his experience of working with the Beatles, all the way from “Love Me Do” to Abbey Road, and the result was published in three parts, on August 21 and 28 and September 4, 1971. Lennon and McCartney were at war with each other that year, and some of what he said got up John’s sensitive nose, provoking a couple of letters from New York, the first of which you can see above. But when I asked Martin about the making of “A Day in the Life”, he responded with a very thorough and interesting description, giving a vivid snapshot of the creative relationship between the producer and the four young men he always referred to as “the boys”, a partnership based on his willingness to entertain their interest in taking risks and their respect for his experience and integrity. Had he, I asked, been responsible — as rumour then had it — for sweeping up several seemingly disconnected musical episodes from the studio floor and sticking them together to create a masterpiece?

No, let’s explain that. John had this song, which started off with his observation, and his part was the beginning and the end, and Paul’s was the middle bit. We started recording it with Paul on piano and John on guitar, and we decided we needed another riff in it, and Paul said, “Well, I’ve got this other song — ‘Got up, got out of bed…'” — and he was going to make that a separate song. He said, “You can use it if you like, put it in your one. Will it fit?” They thought about it for a bit and decided it would work, and they wanted something different in it but they didn’t know what.

They decided that they were going to put a lot of just rhythm in it, and add something later. So I said, “Let’s make it a definite number of bars, let’s have 24 bars of just rhythm in two places, and we’ll decide what to do with them later.” They said, “How are we going to know it’s 24 bars, because it’s a long time?” So we had Mal (Evans) standing by the piano, counting “One… two… three…” and in fact he had an alarm clock, because he was timing the thing as well, and it actually went off. On the record you can hear Mal saying, “Twenty one… twenty two…” if you listen.

When they’d done it, I asked them what they were going to do with those bloody great gaps. Paul said he wanted a symphony orchestra, and I said, “Don’t be silly, Paul — it’s all right having 98 men, but you can do it just as well with a smaller amount.” He said, “I want a symphony orchestra to freak out.” So I said, “If you really want one, let me write something for it.” He said, “No, I don’t want you to. If you write it, it’ll be all you. Let’s have just something freaking out.” I said, “Let’s be practical. You can’t get an orchestra in there and say, ‘Freak out, fellers,’ because nothing would happen. They’d just look embarrassed and make a few funny noises.”

So I booked a 41-piece orchestra, half the normal symphony orchestra, and I spent some time with Paul and John. I wrote out the obvious underlying harmonies, and during the main 24-bar sections John and Paul suggested that we should have a tremendous shriek, starting out quietly and finishing up with a tremendous noise. So I took each instrument in the orchestra and at the beginning of the 24 bars I wrote down their lowest note, whatever it was, so that the cello, for instance, had a bottom C, and at the end of the 24 bars I gave them their highest note related to the chord of E. And throughout the 24 bars I just wrote “poco a poco gliss(ando)”, and when it came to the session I told the musicians that they had to slide very gradually up and those people in the woodwind who needed breaths should take them at random. It was just a general slither.

But when we came to do it, the boys said they wanted to make a real event of it. So they got all their friends to come along and dress up and at that time Mick (Jagger) and Marianne Faithfull came along and all their Apple shop friends — the Dutch people — and there must have been about 40 of them, all freaking out with joss sticks. Paul said, “We’re going to be in our flowers but we don’t expect you to do that because you’re not that kind of person.” I said, “Thank you very much.” He said, “But I want you to wear evening dress, and the orchestra, too.” So I booked the orchestra in evening dress, and when it came to the point Paul had brought a lot of carnival gear — funny hats and false noses — and I distributed them among the orchestra. I wore a Cyrano de Bergerac nose myself. Eddie Gruneberg, who is a great fiddle player, selected a gorilla’s paw for his bow-hand, which was lovely. It was great fun.