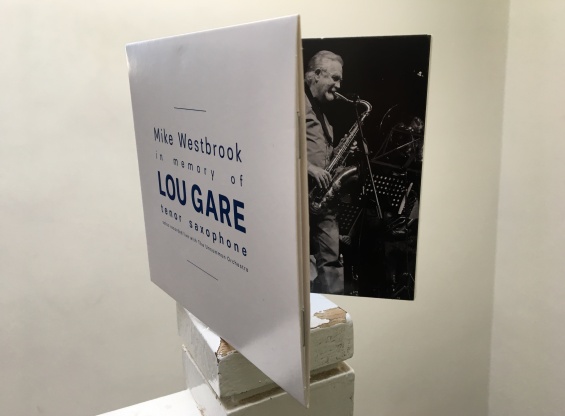 There was a special magic about Lou Gare’s saxophone playing, as many people rediscovered when going back to his slender discography on hearing of his death towards the end of last year, at the age of 78. Now Mike Westbrook, in whose bands Gare played in the 1960s and again in recent years, has done us an enormous favour by assembling and releasing a CD containing nine examples of his mature playing in latter-day concert and club performances with the Uncommon Orchestra.

I don’t know what effect his years as a free-improvisation pioneer with AMM had on Gare’s approach to music, but these performances show that he could infuse what you might call a fundamentally mainstream-modern approach with freshness and substance. In his conception, an almost old-fashioned warmth was no barrier to modernity.

In Memory of Lou Gare, as the compilation is titled, begins with the 12-minute version of Westbrook’s “D.T.T.M.”, an adaptation of a section of the suite On Duke’s Birthday, that I mentioned in a post written for this blog soon after his death. It’s a compellin extended meditation on the blues, including a marvellous unaccompanied section, and the inclusion of an earlier version gives us the chance to appreciate Gare’s reluctance to repeat himself.

There are shout-ups, like the stomping arrangement of Chris McGregor’s “Manje” which Westbrook created for the Dedication Orchestra, and moments of exquisite invention, like Gare’s spellbindingly allusive treatment of Billy Strayhorn’s “Lush Life”, almost entirely unaccompanied and bearing, as Westbrook remarks, traces of the influence of Paul Gonsalves. The extract from Westbrook’s extended rearrangement of “Johnny Come Lately”, another slice of Strayhorn, features a Mingus-like bass introduction from Marcus Vergette leading to a beautifully “down” groove over which Gare wails before the rest of the saxophone section join him for an exuberant collective improvisation.

“These are not studio performances,” Westbrook writes in his sleeve note. “There are rough edges and the sound balance is not always ideal. Yet, captured in the real world, in the heat of the moment, ad hoc recordings like this… perhaps offer an insight into Lou’s instant creativity… that a more controlled studio session might never achieve.” Exactly so.

* Mike Westbrook: In Memory of Lou Gare is on the Westbrook Records label: http://www.westbrookjazz.co.uk.

Lou Gare held his tenor saxophone aslant, like Lester Young, whose light-fingered articulation and disdain for the obvious he shared. Gare was born in Rugby but it was in Plymouth in the early 1960s that he first played with the band of the young Mike Westbrook, alongside the even younger John Surman. In London in 1965 he became a founder member, with Eddie Prévost, Cornelius Cardew and Keith Rowe, of AMM, one of the seminal groups of the first generation of British free improvisers. Lou was on their debut album, AMMMusic, recorded at Sound Techniques in Chelsea and released by Elektra Records in 1966. Six years later, with the group reduced to a Gare-Prévost duo, they performed at Harvey Matusow’s International Carnival of Experimental Sound event in London, their set released initially in part on an Incus EP as AMM at the Roundhouse and then in full on a Matchless CD under the same title.

In the 1970s Gare moved to Devon, where he worked as a teacher of Aikido, a modern Japanese martial art. There he played with the pianist Sam Richards in the band Synchronicity; he was also reunited with Westbrook, joining the latter’s locally based Uncommon Orchestra. This piece of film is from their performance at the Barnfield Theatre in Exeter in December 2014. Gare is featured throughout a 12-minute piece called “D.T.T.M.”, adapted from a section of Westbrook’s suite On Duke’s Birthday and dedicated to the trombonist Danilo Terenzi and the drummer Tony Marsh. It’s a quietly phenomenal performance, devoid of rhetoric but bursting with invention, the soloist’s thoughts unfurling at his own pace and expressed with a lovely laconic warmth. I don’t think I’ve heard a more subtly dramatic example of a tenorist working with a big band since Wayne Shorter emerged from the swirling mists of Gil Evans’ “The Barbara Song” in 1964.

Perhaps inspired by the example of Sonny Rollins, Gare was also a wonderful unaccompanied improviser, as he demonstrated on a Matchless album titled No Strings Attached in 2005 and in this clip from 2013. When he died on October 6, aged 78, British jazz lost a voice of quiet but resolute originality.