One night in Berlin 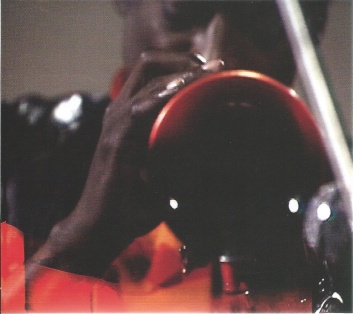 At the start of the film of the Berlin concert which forms a bonus DVD to three audio CDs of the recently released Miles Davis Quintet Live in Europe 1969 set, you can’t help being struck by the impassive demeanour of the musicians as they are announced, one by one, to the audience. Jack DeJohnette doesn’t even look up as he fiddles with the placement of a microphone boom over one of his cymbals. Dave Holland, the young Englishman, is expressionless as he adjusts his double bass. Chick Corea reaches out his left hand to twist a knob above the keyboard of his Fender-Rhodes piano. Wayne Shorter licks his mouthpiece and stares into the middle distance. Meanwhile Miles has already prowled on to the stage, clearly not caring that the spontaneous wave of applause for his arrival has disrupted the MC’s scene-setting introductions. From none of the musicians comes even the tiniest acknowledgement of the audience’s welcome. This is how far the influence of Miles’s own super-cool on-stage deportment had spread, to men a generation younger than him (and, in the case of Corea and Holland, with naturally outgoing temperaments); he, in turn, is taking his wardrobe cues from them.

None of that stops it being a great concert, of course — or half a concert, in fact, since Miles’s group were sharing the bill at that night’s concert with Stan Kenton. You might think it an unlikely combination, even by the eclectic standards of the Berliner Jazztage, and that was how the 2,400-strong audience saw it, too. I remember half of them vociferously expressing their dissatisfaction with Kenton’s set, while those who acclaimed Kenton were clearly disconcerted by what Miles was up to (although their presence can be detected in the film only in the shot of some listeners frowning and shaking their heads as the camera scans the audience while the band leaves the stage). This intolerance was typical of Berlin audiences of the time and seemed particularly impolite since the whole festival, including that evening’s performances, had been dedicated in advance to Duke Ellington, who was due to appear at the same venue the following night in a concert scheduled in celebration of his 70th birthday.

It was my first exposure to Miles in person, and I certainly wasn’t disappointed. Urged on by sidemen who were leading him to the frontier of free jazz, he was spellbinding. Less than a year later, as he veered away from freedom towards an engagement with funk, he would be wanting his musicians to anchor the beat in a much more explicit way. But this was enthralling, a  freewheeling post-In a Silent Way, pre-Bitches Brew journey into abstraction, with a gorgeously oblique version of “I Fall in Love Too Easily” to seduce even those scandalised by the black shirt, trousers and leather waistcoat and the orange and gold scarf in which he took the stage, an outfit to match his black and orange trumpet.

Poor Kenton suffered far worse from the hecklers. He was booed even before he started, and later confessed that the experience had given him a sleepless night. Conducting the specially assembled Berlin Dream Band, a 19-strong multinational emsemble which included the trumpeter Carmell Jones, the trombonists Ake Persson and Jiggs Whigham and the alto saxophonist Leo Wright, he ran through a series of his best known pieces: “Artistry in Rhythm”, “Intermission Riff”, “The Peanut Vendor” and so on. Towards the end, however, he gestured the band to stand down as he performed his personal homage to Ellington, a five-minute variation on “Take the ‘A’ Train” delivered with such sincerity of emotion that the dissenters were temporarily silenced.

From the point of view of the audience’s divided reaction, it was one of the most bizarre concerts I’ve ever attended. The festival’s director, the late Jo Berendt, a man of broad vision and catholic taste, was intensely embarrassed. The following night, however, Ellington took the stage at the head of a band including Cootie Williams, Lawrence Brown, Johnny Hodges, Paul Gonsalves and Harry Carney, and harmony was restored.