Nik Bärtsch at the Barbican 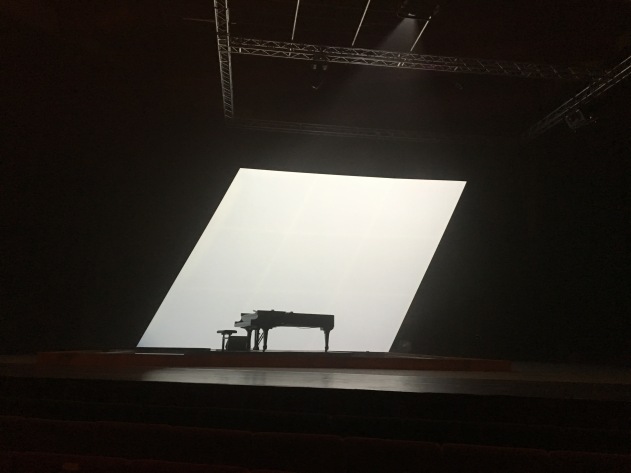 This is how is began, with a seven-foot Steinway marooned on a dais in a lagoon of water installed on an enlarged stage at the Barbican Hall, silhouetted against a rhombus of light projected on to the back wall. As the house lights dimmed to blackness, the Swiss pianist and composer Nik Bärtsch, as usual shaven-headed and dressed in the black robes of a ninja monk, emerged from the wings and made his way to the instrument across a causeway which was then removed by stagehands. Bärtsch settled himself before launching into an hour-long piece called When the Clouds Clear, a “light and sound poem” created in conjunction the London-based visual artist Sophie Clements.

Bärtsch’s music is utterly sui generis: a highly personal version of minimalism that is most often expressed with the other musicians of his quintet Ronin, a project developed over almost 20 years at weekly sessions in a Zurich club that he co-owns. Each of his compositions is titled “Modul” and given a number. This mirrors the seemingly industrial precision with which they are conceived and performed, based on small melodic cells and exacting rhythmic overlays whose teasing syncopations generate tension, but it gives no idea of the emotion generated when, on a sudden shouted cue, one locked groove instantly gives way to another, the intensity rising exponentially.

All this was reflected in his unaccompanied playing last night, opening with a single repeated note tested for overtones and modified for attack and decay before evolving through an hour of contrasting moods and densities, often displaying his highly personal use of the prepared-piano techniques now common among those of his and subsequent generations of acoustic keyboard improvisers. Bärtsch can stun a note so that it acts like a rimshot from Philly Joe Jones or Clyde Stubblefield, laying it against a frantic weave of arpeggiation or letting it punctuate in a moment of silence. Sometimes he reached inside the instrument to make it hiss or growl, before building fantastic cataracts of sound that forfeited all note-definition and seemed about to burst the walls of the auditorium.

Sophie Clements’ lighting and projections began with minimalistic monochrome geometries creeping across the set before she introduced backdrops of waves and skies, washed in blue or grey. This seemed worryingly literal — waves of water, waves of sound — but only for the briefest moment until it became apparent how beautifully the visuals and the music were creating (to paraphrase Wallace Stevens) something beyond them, but themselves. Towards the end, drops of water began to fall from the roof into the lagoon: an illusion of the elements invading the music. (There was some wry amusement about this afterwards, given that parts of Britain had spent the week battling floods.)

The  austere, almost hieratic air of Bärtsch’s music and self-presentation is utterly deceptive; its end product is human warmth, and the prolonged ovation he shared with Clements was generated by art that, for all its refinement of technique and conception, communicated on the most immediate level. I’d be surprised if there were a soul in the hall who, having absorbed a genuinely extraordinary experience, wouldn’t have been happy to sit through it all again straight away.

* Nik Bärtsch and Sophie Clements were appearing on the first night of the 2019 EFG London Jazz Festival. This was the second performance of When the Clouds Clear, which was co-commissioned by the Enjoy Jazz Festival and the Barbican and received its première in Mannheim earlier this year.