Swing Out Sister in Islington 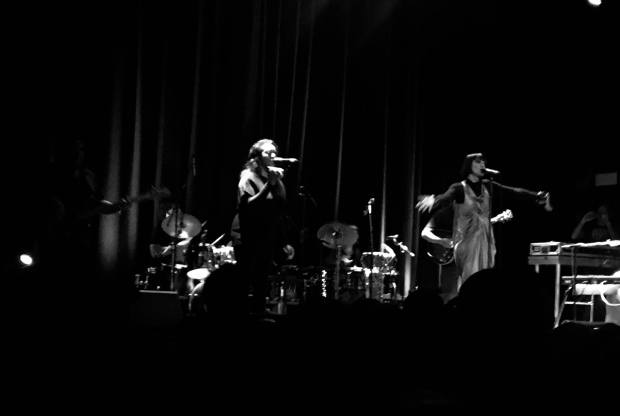 Since they made one of my favourite albums of the year so far, I was keen to see Swing Out Sister at Islington Assembly Hall last night. It turned out to be just what I needed: an hour combining the exhilarating grooves of soul music with the warmth of something home-spun and hand-finished, made by enthusiasts.

I’d expected to hear a higher proportion of songs from the new album, Almost Persuaded, but this was more of a greatest-hits night, which certainly suited the capacity crowd. It suited me, too, when they fired up their lovely version of Barbara Acklin’s “Am I the Same Girl”, which could have gone on all night. The arrangement of “Stoned Soul Picnic” was quite beautifully conceived and executed, Corinne Drewery sharing the lead vocals with Gina Michele in a rare example of a Laura Nyro cover not paling by comparison with the composer’s original.

There was a lot to enjoy, notably the guitarist Tim Cansfield’s discreet Philly-style octave riffs and fills, the presence of the wonderful Jody Linscott on congas, tambourine and other percussion (if I were ever putting together a soul band, Jody would be my first call), and the way Andy Connell integrates quotes from Steely Dan and Stevie Wonder into the backgrounds. When they finished off with “Breakout”, most of the audience — particularly the women – sang along with what had clearly been a personal dancefloor anthem.

The merchandise stall was selling an instrumental-only remix of Almost Persuaded, an album-length exclusive for the people who attended the gig. It’s a great companion piece to the original album. I don’t know how you’d get your hands on a copy, but it’s certainly worth a try.