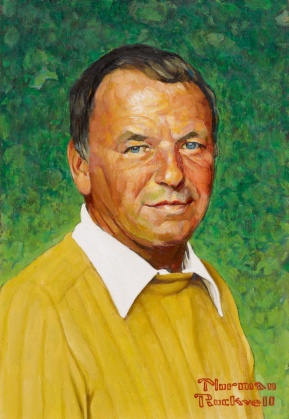 Norman Rockwell’s “An American Classic (Portrait of Frank Sinatra)” is among the headline items in a series of sales in New York next month, at which Sotheby’s will auction off the possessions of Sinatra and his fourth wife, Barbara Marx, who died last year. Commissioned by Frank in 1973, the painting hung on the wall of Barbara’s Los Angeles apartment after his death and has an estimate of $80-120,000. Rockwell, who created so many memorable magazine covers for the Saturday Evening Post, was in his 80th year when he painted a work that, for all its superficial suburban blandness, catches an interesting light in the eye and turn of the mouth.

Other objects for sale, besides a great quantity of the last Mrs Sinatra’s jewellery, include some of Frank’s own modernist abstract paintings; a leather-bound final script of From Here to Eternity, in which Sinatra used the part of Private Angelo Maggio to turn his career around; a pair of AKG microphones that he carried on the road; a monogrammed orange jacket that he wore on his private jet; a personalised yarmulke; and letters from every US president from Truman to Clinton.

There is also a poster from his two-week run at the London Palladium in July 1950, his first dates outside America, in which he shared the bill with Max Wall, the Skyrockets Orchestra, the Tiller Girls, Krista & Kristel, Pierre Bel (“continental juggler”), and Wilson, Keppel & Betty. The Daily Graphic talked to him in the aftermath of the opening night, from which he was lucky to escape with his clothes on. “Two tall redheaded girls nearly got my tie,” he told the paper. “One was actually pulling it off my neck. I pulled back.” Ava Gardner, with whom he was in the middle of a torrid affair, was in the audience as he opened with “Bewitched”, “Embraceable You” and “I Fall in Love Too Easily”, during which the pandemonium in the stalls began.

* You can find details of the auction here: http://www.sothebys.com/en/auctions/2018/lady-blue-eyes-property-barbara-frank-sinatra-n09963.html?locale=en