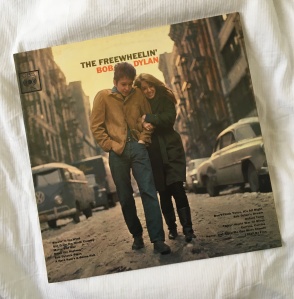 The man who took the photograph that appeared on the cover of The Freewheelin’ Bob Dylan died on March 18, aged 88. Don Hunstein’s obituary in the New York Times tells us that he bought a Leica while serving with the US Air Force in England, and attended classes at the Central School of Art and Design. After returning home he eventually became a staff photographer at Columbia Records, at a time when that meant working with Miles Davis, Billie Holiday, Glenn Gould, Thelonious Monk, Duke Ellington, Leonard Bernstein and many others.

He was in Columbia’s studios when Davis recorded Kind of Blue and Holiday recorded Lady in Satin. But no image of his turned out to have greater cultural resonance than the one he took in a Greenwich Village street on a cold February day in 1963. He had already taken the picture for the cover of Dylan’s debut album (which the art department had flipped, so that Dylan’s guitar looks to be strung for a left-handed player and his coat buttons are on the wrong side). For the second session, Hunstein turned up at the singer’s top-floor apartment at 161 West 4th Street in Greenwich Village.

Suze Rotolo, Dylan’s 19-year-old girlfriend, was present, and a few photographs were taken indoors before the three of them stepped out into the slush-lined streets. Dylan, thinking of his image, put on a thin suede jerkin over his denim shirt. Rotolo sensibly opted for a warm dark-green belted coat. On a nearby side street, Hunstein got them to walk towards him, arm in arm, and started snapping away.

When I interviewed Suze at the time of the publication of her excellent autobiography (A Freewheelin’ Time) in 2008, she told me of a recent conversation with the photographer in which they had disagreed about the precise location of the shot that ended up on the cover. Hunstein said it was on Cornelia Street. She insisted it was Jones Street, a bit further up West 4th. “So that’s going to have to remain a mystery for all those Dylanologists,” she chuckled.

I liked her enormously. When I asked her how it felt to listen now to all those songs written when she and Dylan were together (“Don’t Think Twice”, “Boots of Spanish Leather” and so on), she responded to the sort of crass journalistic question she’d been avoiding for four and a half decades with words that I found very moving. “I can recognise things,” she said. “It’s like looking at a diary. It brings it all back. And what’s hard is that you remember being unsure of how life was going to go — his, mine, anybody’s. So, from the perspective of an older person looking back, you enjoy them, but also think of them as the pain of youth, the loneliness and struggle that youth is, or can be.”

She died in 2011. She and Dylan had stayed in intermittent touch, she told me. A few years after their painful breakup he helped her out when her apartment was destroyed by fire. Among her lost possessions were the coat she had worn that day in 1963, and one of his Gibson guitars.