A night at Silent Green 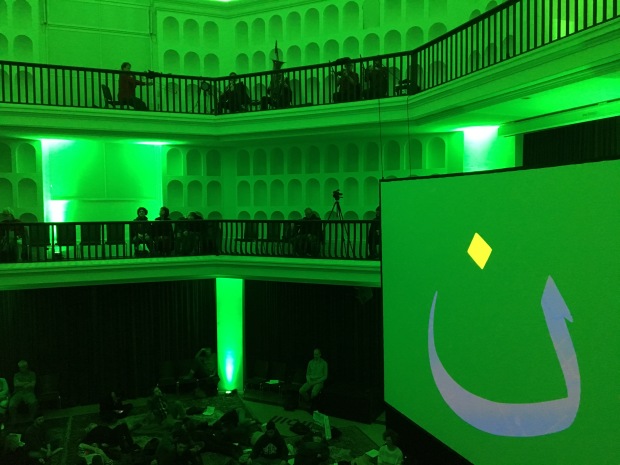 Last summer I was blown away by the latest album from Catherine Christer Hennix, the 68-year-old Swedish-American composer, singer and keyboardist who studied with La Monte Young and Pandit Pran Nath before striking out on her own exploration of sound, light, drones, spirituality and just intonation. Last night I got the chance to see her perform during Berlin’s Maerzmusik festival, at a converted crematorium church in the Wedding district.

Now named Silent Green, it’s an octagonal space with two circular balconies. The floor was covered with oriental rugs, on which the majority of the audience reclined or assumed yoga-style positions. Hennix was positioned alongside one wall, seated at a two-manual electronic keyboard, flanked by the mixing equipment and other devices operated by Stefan Tiedje, her sound engineer and computer programmer. The rest of the audience had chairs on the first balcony. Above us in the upper balcony  were five brass players: Amir ElSaffar (trumpet), Paul Schwingenschlögl (trumpet and flügelhorn), Hillary Jeffery (trombone), Elena Kakaliagou (French horn), and Robin Hayward (microtonal tuba).

Together they performed a piece called “Raag Sura Shruti”, which began with quiet drones from Henna’s voice and keyboard, gradually increasing in intensity until the brass players joined in, coming and going as the music flowed and ebbed and flowed again. If you wanted a shorthand description, you could say that it was as though Terry Riley’s “Persian Surgery Dervishes” had been reorchestrated by Giovanni Gabrieli for the brass choir he had at his disposal in St Mark’s, Venice in the 16th century.

That part of the concert lasted three hours. Not every member of the audience stayed with it. I was fascinated by the slowly changing colours and the stately arc of the music’s evolving narrative. Sometimes it was very beautiful: lustrous, resonant, ambiguous in its tonal movement (thanks to the use of the non-tempered scale), at one point reaching the sort of lung-crushing decibel count normally encountered in another part of the city at Berghain, the techno club with the world-famous sound system. There were other times, understandably enough, when the underlying drones seemed to be hanging around, waiting for something to happen.

Maybe it was my interest in the arrangement of the moving parts that prevented me from achieving the sort of transcendence that this music is ostensibly about. Perhaps I should have been lying down, eyes closed, on one of the Persian rugs, giving myself up to the waves of sound in a non-analytical way. But that didn’t prevent me from enjoying the experience thoroughly and admiring the music greatly, even if it didn’t quite reach the peaks scaled during the New York concert preserved on last year’s album.

Just when the last drone had diminished to a whisper and almost faded away completely, and the musicians had got up from their balcony seats and left the arena, Hennix took over with a closing 15-minute solo improvisation on the keyboard. As she crunched her fingers and fists on the keys, setting up brief, spidery phrases and then splintering them, I thought of how a Chinese boogie-woogie pianist might sound if invited to play a Philip Glass piano étude on one of Sun Ra’s early electronic instruments — the Rocksichord, wasn’t it? — in the style of Cecil Taylor, with an intermittently malfunctioning power supply. An excellent evening all round.