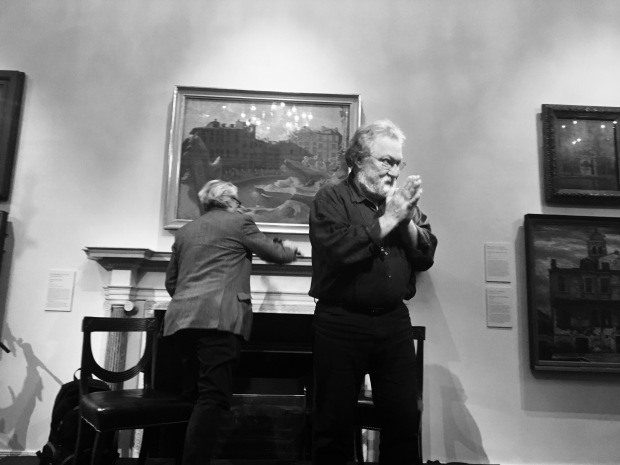 As I was on the way to see the blockbuster Abstract Expressionism show at the Royal Academy the other day, it was pointed out that jazz and AbEx seem to share a special relationship. I suppose that has something to do with synchronicity. Franz Kline and Mark Rothko were creating their revolutionary canvases at the same time as Charlie Parker and Thelonious Monk were making the music that changed everything, and the two developments seemed to share a sensibility. It’s easy to imagine Kline or Rothko playing “Ornithology” or “Well, You Needn’t” while working on a canvas in a Greenwich Village studio.

Easy, but probably misleading. I seem to remember reading that Jackson Pollock listened to Brahms while working on his drip paintings. Yet when Nesuhi Ertegun, the producer of Ornette Coleman’s Atlantic recordings, asked the collector and gallerist Sidney Janis for permission to reproduce Pollock’s “White Light” on the cover of Free Jazz in 1961, he was establishing a link that seemed to contain an emotional truth, if not a literal one. And Coleman’s double-quartet recording was by no means the only modern jazz album to make use of abstract expressionism on its cover: see the art of Martin Craig on the pianist Herbie Nichols’ two 10-inch LPs for Blue Note in 1955, The Prophetic Herbie Nichols Vols 1 & 2, for example.

At the RA, the breathtaking Pollock rooms are the strongest part of an exhibition that also gave me a greater appreciation of Robert Motherwell and Sam Francis. The much-vaunted assembly of giant Clifford Still canvases left me curiously unmoved, and the round space devoted to Rothko resembles an oligarch’s car-boot sale. The final couple of rooms are curiously incoherent. But of course it has to be seen.

The link with jazz was reaffirmed last night when, as one of the opening events in this year’s EFG London Jazz Festival, Evan Parker gave a short solo concert and a conversation with David Ryan under the heading “Jazz Abstraction”– a title adapted from that of a 1961 Atlantic album by Coleman, John Lewis, Gunther Schuller and others (and which, come to think of it, also has an abstract expressionist painting by John Jagel on the cover).

Parker’s improvisations were as astounding as ever in their combination of fine detail and hurtling momentum. Later he remarked, non-judgmentally, that one difference between the AbEx painter and the free improviser is that in the case of the music, the process is the work.

The conversation also produced a couple of self-deprecatory gems. If La Monte Young, while still playing sopranino saxophone, had discovered circular breathing as a means of tying together the repeated motifs with which he was working, the world might never have heard of Evan Parker (who then gave us a demonstration of practising the breathing technique). And had the artist Alfreda Benge not introduced Evan to John Stevens one night in 1966, he might, as he put it, “still have had my nose pressed against the window”. Or so he claimed.

What the painters and the jazz musicians of Parker’s generation and slightly earlier had in common was not just the reassurance of an environment in which they could afford to live cheaply but a powerful belief in the value of their work, whatever valuation the world initially placed upon it. It’s just a pity that today’s commercial market doesn’t view them in the same light.

* Abstract Expressionism is on at the Royal Academy of Arts, Burlington House, Piccadilly, London W1 until January 2. Evan Parker’s latest album is As the Wind, with Mark Nauseef (percussion) and Toma Gouband (lithophones), released on the Psi label. The photograph is of Parker (right) and David Ryan at the RA.