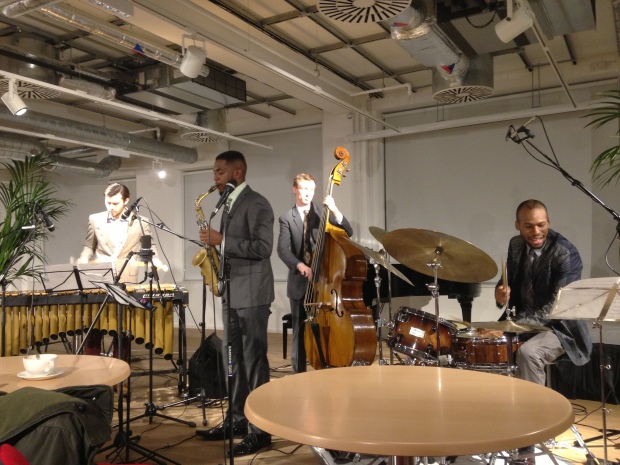 How many great modern jazz ballads are there? I’m not thinking of the kind of American Songbook standards, such as “Body and Soul” or “Lush Life”, that have offered their melodies and chord sequences to jazz improvisers over the decades. I’m thinking of strictly instrumental pieces written by jazz musicians: things like Monk’s “Round Midnight”, Benny Golson’s “I Remember Clifford”, Bill Evans’s “Blue in Green”, Elmo Hope’s “Mirror-Mind Rose”, Stan Tracey’s “Starless and Bible-Black”, or Dudu Pukwana’s “B My Dear”.

There’s one on Empirical’s new album. It’s called “Lethe”, written by the band’s vibraphone-player, Lewis Wright. It starts with soft chimes and Tom Farmer’s double bass in a rising four-note pattern, Shaney Forbes’s pattering mallets on his tom-toms introducing an exposed theme for Nathaniel Facey’s plaintive alto saxophone. Facey’s subsequent improvisation slips easily in and out of double and triple time, encouraging the others to get busier and thicken the textures, but the band never loses the enraptured mood of the theme, which turns the whole seven-minute piece into a complete and very elegant construction, rather than something that just happened.

I’ve heard them play it two or three times in various settings over the past year, along with some of the other new material, and one the things that strikes me about the album, which is titled Connection, is the way they’ve not only captured the spirit of their live performances in the studio but even taken the process a step further.

The band’s fifth release continues their 10-year exploration of the kind of jazz first measured out in those Blue Note albums of the mid-’60s — by Andrew Hill, Eric Dolphy, Bobby Hutcherson and others — that took bebop in a late-modernist direction, very harmonically and rhythmically demanding, avoiding the easier options offered by post-Kind of Blue modal jazz. The music is challenging, often superficially austere and angular, but never academic or unfriendly. The 10 compositions by Facey, Wright and Farmer come at the idiom from a variety of angles, offering plenty of light and shade and exploiting the basic tonal palette and their internal relationships to the full.

They can do many things extremely well, and one of them is swing. Forbes’s drumming on two of Farmer’s tunes, “Driving Force” and “Card Clash”, creates classic triplet-based propulsion of the highest quality, establishing a really inspiring platform for the soloists. By contrast, Farmer’s “The Maze” explores a favourite trick of Miles Davis’s second great quartet by having the lead voices — Facey and Wright — stick to a measured written theme while the rhythm instruments are allowed complete freedom to invent. Wright’s closing “It’s Out of Our Hands” brings their innate lyricism back to the surface, with passages utilising a great asymmetrical Latin groove.

Exceptionally well recorded by Richard Woodcraft at RAK Studios in London, and mixed by Alex Bonney, this is a staggeringly good album that stands comparison with the very best of jazz in the 21st century. And from the way “Lethe” has lodged itself in my head over the past 12 months, I’d say that one deserves to become a classic.

* The photograph of Empirical was taken at Foyle’s in London last year.