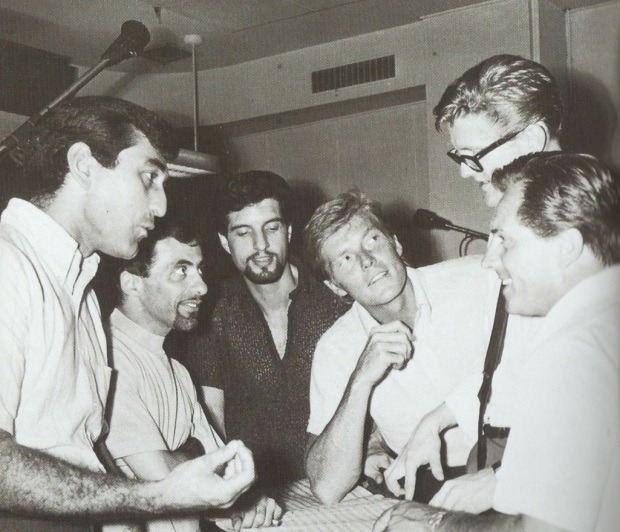 Bob Crewe, who died last week aged 83, was one of the architects of 1960s pop music. Here’s my Guardian obituary. It’s interesting that of all the records he made, among his favourites was one that, from the outside, must have looked highly unpromising: the Four Seasons’ 1966 version of Cole Porter’s “I’ve Got You Under My Skin”.

Written in 1936 for the musical Born to Dance, the song received its definitive reading 20 years later, when Frank Sinatra included it on Songs for Swingin’ Lovers!, a hugely successful album. Sinatra had been featuring it in concert for a decade, but the recorded version benefited from Nelson Riddle’s finger-snapping arrangement, which builds up to Milt Bernhart’s wild trombone solo. It catches Sinatra at the very zenith of his ring-a-ding-dingness.

So it was brave of Bob Gaudio, a member of the Four Seasons and Crewe’s songwriting and production partner, to suggest that they risk a charge of sacrilege by giving it a whirl. The key to the triumphant success of their version might have been the decision to assign the job of arranging it not to one of their regular collaborators, such as the great Charlie Calello, but to the comparatively unfamiliar Artie Schroeck, who had been given his first breaks in the business by Gene Krupa and Lionel Hampton and whose background was in big-band music.

Was it Gaudio, Crewe or Schroeck who made the crucial decision to switch the basic rhythm from a swinging 4/4 to straight eights, thus transforming the song from semi-jazz to pure pop? My guess would be Gaudio. But it’s the arranger who finds a way to integrate the tempo changes, the pauses and the rubato passages, to blend the strings and the tubular bells, to marshal the dynamic shifts, to make a sudden switch to the minor key, and to emphasise the drum fills — probably played by Buddy Salzmann — in a way that evokes the group’s earlier hits. And whoever came up with the repeated “Never win… never win…” in the backing vocals was a man who knew how to craft a hook.

It was a huge hit, of course. No wonder Bob Crewe was so proud of it. Here it is.

* The photograph above, which appears in the booklet accompanying the Four Seasons/Frankie Valli box set Jersey Beat, released on the Rhino label in 2007, was taken during the session at which “I’ve Got You Under My Skin” was recorded in 1966. Left to right: Joe Long, Frankie Valli, Bob Gaudio, Artie Schroeck and Tommy DeVito.