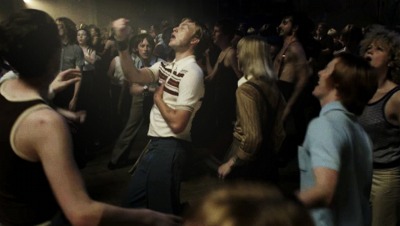 Elaine Constantine’s much anticipated feature film Northern Soul is finally due for its release in mid-October, some 17 years after the project started to form in her mind. The soundtrack album arrived the other day: a CD of 27 songs featured in the movie, a second disc of another 27 favourites for which she couldn’t find room, and a DVD including interviews with the director and Richard Searling, the DJ at the Wigan Casino.

Listening to Constantine’s choice of tracks revived an old yearning to have been born five or 10 years later, to have stayed in the Midlands, and to have taken part in the Northern Soul phenomenon. In the 1960s we didn’t know, as we danced to “Candy” by the Astors, or “Earthquake” by Bobbi Lynn, or “1-2-3” by Len Barry, that we represented merely the prelude to something much bigger. Now I listen to the records I never danced to, the stuff dug out by DJs in the early ’70s — the Fuller Brothers’ “Time’s a-Wastin'”, David and the Giants’ “Ten Miles High” or the Ad Libs’ “Nothing Worse Than Being Alone” — and experience a strange pang of thwarted belonging.

The inherent poignancy of so many Northern Soul records springs from an undertow of regret in the lyric or the voice, carrying the suggestion of a moment of pure happiness that can never be recaptured. There’s no better example than one of the most famous of them all, Tobi Legend’s”Time Will Pass You By”. “Life is just a precious minute, baby,” she sings. “Open up your eyes and see it, baby. Give yourself a better chance, because time will pass you right on by.” (A few years ago my Guardian colleague Laura Barton wrote an eloquent column about it.) Many years later the singer was filmed, miming to the record. Scroll through the comments under the YouTube clip and eventually you’ll come to this, posted five years ago by someone called “cherry blossom”:

This song takes me back to the last moments of dancing and grabbing your bag to get home on the train to Wigan. Remember oldies night and the nicotine and sweat dripping off the ceiling. Feeling everyone was your pal. Classic days.

“Feeling everyone was your pal.” What a wonderful memory to have. It lives on in this special music, in which the whirl of authentic emotion is all that counts.

The clip of Legend (real name: Bessie Gupton) was filmed at the behest of Ian Levine, the former Blackpool Mecca DJ, who tracked her down in Canada in 2007. When I was at Island in the mid-’70s, Ian had approached me with the idea of releasing some recordings he’d been making in Chicago with American singers. They included Barbara Pennington’s “Running in Another Direction”, which we put out. Sadly, it turned out to be not the sort of thing the Island promotion and sales machine was good at handling in 1976. I remember Evelyn Thomas’s “Weak Sport” and L.J. Johnson’s “Your Magic Put a Spell on Me” as being the other finished masters Ian brought with him. He went on to channel his productions in the direction of Hi-NRG dance music, with considerable success.

Anyway, Constantine’s soundtrack album contains some great stuff, running the gamut from Shirley Ellis’s sublime “Soul Time” to a fabulous eccentricity like The Crow’s “Your Autumn of Tomorrow”. I was extremely pleased to be reminded of “I Surrender”, by the wonderful Eddie Holman. It’s not a Northern Soul greatest hits collection, but there are plenty of those around. It’s more interesting and personal than that, and it certainly whets the appetite.

I hope the new film’s thunder hasn’t been stolen by Keeping the Faith, the excellent documentary shown on BBC2 a few weeks ago (you can find it here). I’m sure that, after all these years, there’s room for both approaches to a fascinating subculture that refuses to lie down and die. And if she can get close to the mood captured three years ago by this fine Dean Chalkley short, Young Souls, she’ll be all right.

* The photograph above is a still from Northern Soul. Details of the film, including the trailer, are on its website: http://www.northernsoulthefilm.com