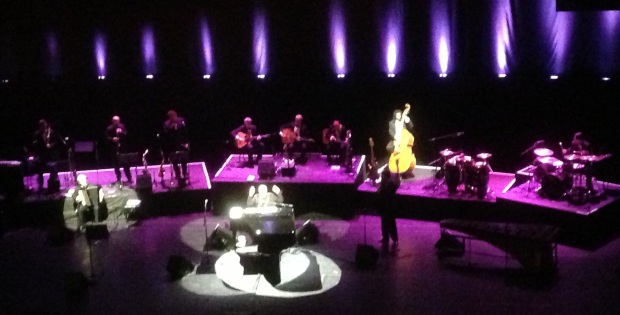 When I get home from a concert by Paolo Conte, the first thing I do is put on some of his records. Great as so many of them are, however, they’re not the same as watching this wonderful figure — half professor, half boulevardier, like someone you might spot in the corner of a cafe in Trieste, quietly writing in a small notebook — deliver his delicious songs while manipulating his excellent musicians through an evening that never seems long enough.

Conte is 76 now, and having given his audience a single encore at the end of an hour and a half of music at the Royal Festival Hall last night, he smiled and drew his finger across his throat, to indicate that there would be no more. But what he had given was more than enough to ensure that he would be bathed in waves of affection, respect and gratitude.

He had brought 10 of the 11 musicians who accompanied him on his last studio album, Nelson, released in 2010, and they were so outstanding, individually as well as collectively, that I’m going to name them all, in the knowledge that the list will give you some idea of the versatility at Conte’s command, and the range of textures available: Claudio Chiara (tenor saxophone, flute, accordion), Luca Velotti (alto saxophone, clarinet), Massimo Pizianti (piano, keyboards, accordion, bandoneon, soprano and baritone saxophones, clarinet), Lucio Caliendo (keyboard, oboe, bassoon, percussion), Piergiorgio Rosso (violin), Nunzio Barbieri, Daniele Dall’Omo and Luca Enipeo (guitars), Jino Touche (double bass, bass guitar), and Daniele Di Gregorio (drums, percussion, marimba).

Conte’s performance was part of the opening weekend of the EFG London Jazz Festival, and although what he does is basically a form of pop music, jazz provides its underpinning and its guiding spirit. For him, sounds that were once at the cutting edge — the horns of Ellington’s Cotton Club band, for instance, or the guitars of the Quintet of the Hot Club of France — have lost none of their modernity. His particular gift is to write songs with chord structures so beguiling that you don’t miss the apparent absence of a melody (if there is one, his mode of laconic recitation barely hints at it).

He has so many songs that it doesn’t really matter which ones he chooses on any given night. He might not sing your favourite, but those he does perform — including the ones you don’t recognise — will be more than sufficient. Last night he included a swooning “Gli impermeabili”, the spaghetti western swing of “Diavolo rosso”, a yearning “Max”, a driving “La Negra” (one of a number of up-tempo songs in which the advantage of having three acoustic rhythm guitars strumming away became apparent) and, best of all for me, a long, slow sweep through the elegantly descending cadences of “Alle prese con una verde milogna”, the sultriest tango you could ever hope to hear, supported by Touche’s swaying bass and drenched in grown-up romance.

There were all sorts of sounds to be heard: Di Gregorio leaving the drums to play a racing marimba improvisation behind the leader’s vocal on “Dancing”, for instance, or an unorthodox horn section of alto, tenor and baritone saxes plus bassoon, or the combination of accordion and bandoneon, or a magnificently flamboyant violin solo from Rosso, or Conte’s occasional insistence on singing through a kazoo, each element within the complex overall design perfectly calibrated while retaining a precious air of informality and spontaneity. There really is nothing like it.

Tags: EFG London Jazz Festival, Paolo Conte
From: Jazz
← Last tango in Kilburn
Back into the arms of Venus de Milo →
One Comment Post a comment