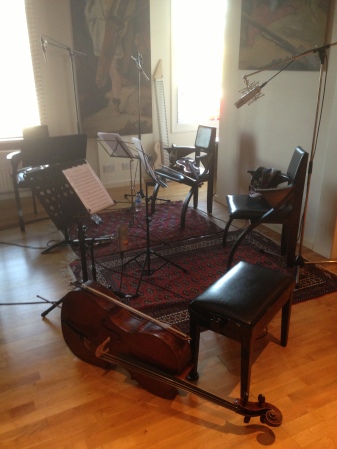 A corroncho, Phil Manzanera tells me, is a particularly ugly fish found in Colombia. When fisherman pull one out of the water, they take a look and throw it straight back. It’s what the people of Bogota call the inhabitants of Barranquilla.

The Two Corronchos is the name of a project on which Manzanera is currently working with his friend Lucho Brieva, a Colombian sculptor who occupies part of the mews in north-west London where the former Roxy Music guitarist has his recording studio. Manzanera was born to a Colombian mother, spending much of his early life in Venezuela, Colombia and Cuba, and the album will tell the possibly somewhat picaresque story in music of two men travelling round the Americas, providing social and political commentary while reflecting local sounds and styles.

A profusion of Brieva’s iron gates and railings are a feature of the buildings, which were once a stables and a railway depot. The main line from Euston runs a stone’s throw away, necessitating considerable efforts to sound-proof the rooms when the studio was built. On Manzanera’s walls are the posters and gold records and other bits and pieces of memorabilia that you’d expect, but also lots of South American art and several large paintings by Nick de Ville, the professor of visual art at Goldsmiths College and the art director of the early Roxy Music album covers.

I first met Phil in November 1970, when he and Bill MacCormick, one of his fellow members of a band called Quiet Sun, came to see me at the Melody Maker. They’d sent me a tape, I’d liked the sound of it, and after we talked in the Red Lion, the pub round the back of Fleet Street where artists used to come to be interviewed, I wrote a piece about them. The next time I saw him, several months later, was at an old cinema in Battersea, where he was doing a spot of roadying for the embryonic Roxy Music. They were auditioning for EG Management and he was about to step into the shoes of the departing David O’List.

When I paid him a visit this week, Manzanera was welcoming a string quartet led by Ros Stephen, the violinist and arranger whose work made such an impact on For the Ghosts Within, the album she made three years ago with Robert Wyatt and Gilad Atzmon. Like Wyatt’s previous two albums, it was made at Phil’s studio. This time she and her colleagues were here to add their contribution to a piece from the Corronchos project and to a track from Manzanera’s next album of his own guitar music.

The latter came first, and presented Stephen with the challenge of writing an arrangement for a piece called “Rosemullion Head”, a gentle, lyrical acoustic guitar improvisation (inspired by a coastal path in South Cornwall) to which minimal piano, bass and percussion had been added later. The sobriety of the lines for two violins, viola and cello placed a gently restraining hand on any hint of romantic indulgence, and after a handful of takes — in which adjustments were made to compensate for metrical irregularities in the original improvisation — an interesting phenomenon emerged: what had started out sounding like an accompaniment began to create the illusion of a dialogue. As one playback followed another it seemed as though the guitar, recorded long before, was now responding to the strings.

Next came “El Tango Infinito”, in which the two Corronchos visit Buenos Aires and whip up a fantastic groove, something of which the Gotan Project mob would be proud, with a laconic rap from Brieva and a fine guitar solo. Here, too, Stephen found a way of making the string quartet sound integral. Later in the day her husband, Julian Rowlands, would be arriving to add his bandoneon to the mix. He’s also her partner in their bands Tango Siempre and Orquesta Tangazo; you’ll find an example of their work here.

Outside in the courtyard, the early winter sun was setting on Lucho Brieva’s exotic ironwork. I left with the echoes of two pieces of music that won’t make their public appearance for some time, but which I’m looking forward to hearing again.