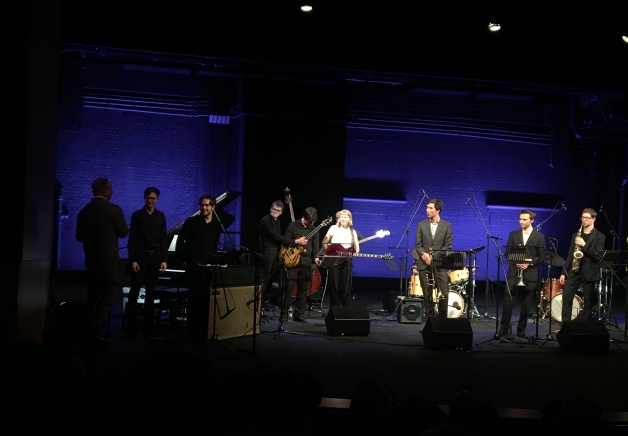 No apologies for returning, one last time, to the continuing celebrations of ECM’s 50th anniversary. For a short festival at the Royal Academy of Music, the director of the jazz programme, Nick Smart, invited several of the label’s luminaries — the bassist Anders Jormin, the pianists Craig Taborn and Kit Downes, the singer Norma Winstone and the saxophonist Evan Parker — to spend a week working with students before presenting the results in two public concerts on Thursday and Friday night.

Jormin’s compositions — very much what many people would think of as archetypal ECM music, with a restrained lyricism that seemed to have its deepest roots in Nordic folk music — were played by a septet notable for the outstanding singing of Ella Hohnen-Ford and Alma Naidu. Downes and his colleagues in the trio called ENEMY, the bassist Petter Eldh and the drummer James Maddren, enhanced their tricky compositions with arrangements for string quartet, three woodwind and two percussionists, of which the most successful were “Last Leviathan”, a piece from Downes’s ECM debut, Obsidian, fetchingly rearranged for strings and piano, and Eldh’s eventful “Prospect of K”, cunningly scored by Ole Morten Vågan.

For the festival’s closing set, Smart led the Academy big band through a sequence of rare and unheard compositions by the late Kenny Wheeler, another ECM stalwart, featuring Winstone, Parker and Stan Sulzmann. The juxtaposition of the two tenors of Parker and Sulzmann created a contrast that exemplified the breadth of Wheeler’s conception — although their thunder was almost stolen by the alto saxophone of Lewis Sallows, a student whose long solo displayed a disinclination to plump for stylistic orthodoxy and a powerfully dramatic imagination. The crisp and flexible drumming of Ed Richardson, an Academy graduate, also took the ear.

Twenty four hours earlier, Sallows had also been part of the 12-piece band (pictured above) which provided the festival’s highlight. Craig Taborn is already known as one of the most creative and original pianists of the current era; those who were present at the Vortex for his solo gig last year speak of it in awed tones. Friday’s set showed him to rank alongside Steve Lehman, Vijay Iyer, Mary Halvorson and Eve Risser as an adventurous composer-leader who knows how to exploit the resources of a larger ensemble while retaining all the spontaneous interaction of a small group.

Although this was music of great sophistication, there were times when its sheer fire put me in mind of those great Mingus units of the late ’50s and early ’60s, when the members of the Jazz Workshop learnt their parts by ear and took it from there. The trombonist Joel Knee, the trumpeter Laurence Wilkins and the two altoists, Sallows and Sean Payne, threw themselves into the project with enormous skill and gusto, and the ear was also taken by the guitarist Rosie Frater-Taylor, whose opening solo was strikingly thoughtful and who made significant contributions to the riff-ostinatos on which several of the pieces were built.

Taborn’s own solos on acoustic and Fender-Rhodes pianos demonstrated his gift for gathering all the energy once associated with Cecil Taylor and using it to activate the coiled springs of his own imagination. During an unaccompanied introduction, he made the Rhodes roar in a way that completely divested the instrument of its familiar role as a provider of a cool funky background sound. It was one of many moments, individual and collective, that made the event such a success.