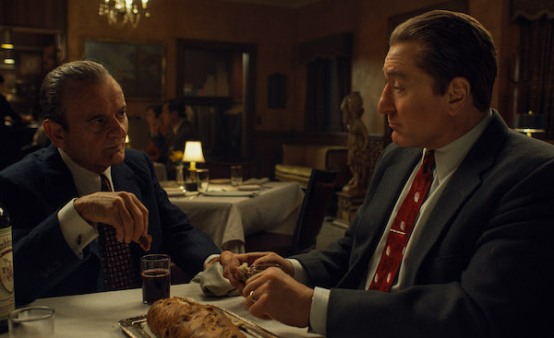 In New Jersey sometime in the late 1950s, according to legend, Joe Pesci introduced his friend Frankie Valli to the young songwriter Bob Gaudio, a meeting that gave the Four Seasons their career. Pesci’s own singing career never reached such heights. His fame came from elsewhere, mostly from the terrifying “Do I amuse you?” scene with Ray Liotta in Goodfellas.

If you’ve seen The Irishman, you’ll know that Pesci, on his emergence from a 20-year screen hiatus, steals the film: he sets its temperature and provides its emotional core, without raising his voice once. He has also taken the opportunity to revive a recording career which hitherto produced only two albums: Little Joe Sure Can Sing! in 1968 and Vincent LaGuardia Gambino Sings Just For You — performing as his character from My Cousin Vinny — in 1998.

Pesci… Still Singing sees a return to his first love: singing ballads in the piercing, often anguished style of the late, great jazz-lounge maestro Jimmy Scott. Three years ago I wrote about Pesci’s appearance on two tracks of Scott’s posthumously released album, I Go Back Home. One of those duets, on “The Nearness of You”, reappears here. There are also two pleasant collaborations with Maroon 5’s Adam Levine on a suave “My Cherie Amour” and the cha-cha groove of “Baby Girl”. Otherwise Pesci’s high, soulful voice is alone with a bunch of orchestral arrangements which are lavishly appointed but never to the extent that they turn the music into mush. Anyone with a fondness for the work of Nelson Riddle will appreciate the use of cor anglais on “Falling in Love Is Wonderful”, while space is made for fine trumpet, tenor and guitar solos, and the playing of the rhythm section is beautifully supportive. Only a melodramatic “Exodus” goes over the top.

I wish I could credit the arranger and the musicians properly, but the curse of streaming — the only way this album is currently available — is that you have to do without the sort of information that listeners of earlier generations depended on as we joined the dots in our quest for musical knowledge. Maybe eventually there’ll be a physical manifestation of Pesci… Still Singing, on which these mysteries will be solved and credit properly apportioned. (Since first posting this I’ve been told that the personnel — on some tracks, at least — includes the pianist Kenny Barron, the guitarists Pat Martino and Vinnie Corrao, the bassist Christian McBride and the drummer Lewis Nash, which explains a lot.)

What I can tell you for certain is that Pesci sings with an exemplary attention to meaning, phrasing and tone. He treats some fine songs — “The Folks Who Live on the Hill”, “If I Should Lose You”, “Round Midnight”, “In My Solitude”, “I’ll Be Seeing You” and so on — with the necessary respect, and they repay his courtesy. This is an album made with love. And to those who don’t get the point: it’s entirely your loss.

* I streamed Pesci… Still Singing from Amazon Music, at a cost of £7.99. The photograph above is a still from The Irishman, with Joe Pesci as Russell Bufalino and Robert De Niro as Frank Sheeran.