‘Dancing in the Dark’ 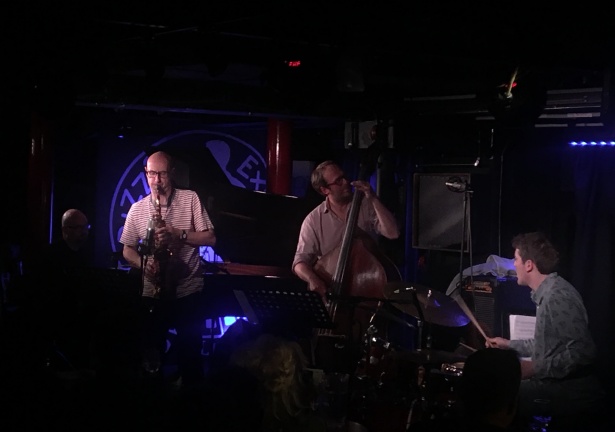 One summer night last year a quartet led by the alto saxophonist Martin Speake, with Ethan Iverson on piano, played a version of “Dancing in the Dark” — the Broadway ballad, not the Springsteen song — so suffused with the essence of noir that it had me turning towards the door of the Vortex, waiting for Gene Tierney or Gloria Grahame to make their entrance.

So subtly did the musicians enunciate the theme that I didn’t even recognise it as the song to which Fred Astaire and Cyd Charisse danced in Central Park in a wonderful sequence from The Band Wagon in 1953 (not much noir there, even though they were dancing by the light of a street lamp). But Speake, Iverson, the bassist Fred Thomas and the drummer James Maddren put an entirely different set of castors under the tune, with the pianist’s lush chorded solo bringing the evocation of a darker, more sensual mood to its peak.

Earlier that day, in a session at Trinity Laban Conservatoire, they’d recorded enough pieces for an album. It’s called Intention, it’s on the Ubuntu label, and it’s a fine addition to the extensive body of work compiled by Speake over the course of what is now a long and distinguished career, showing the way he can focus a variety of source material through the lens of his distinctive musical character.

They launched the new release this week with a couple of nights at the Pizza Express, playing originals including “Becky”, whose prayer-like cadences put me in mind of the John Coltrane of Crescent, and a backwoods shuffle called “Twister”, while Charlie Parker’s “Charlie’s Wig” was transformed into bebop the way Lennie Tristano and Lee Konitz heard it. Speake and Iverson are among those relatively rare musicians who’ve thoroughly absorbed the work of the Tristano school, allowing it to merge with other influences as they formed their own voices.

And, of course, amid the pieces that swung, skimmed, floated or grooved, there was “Dancing in the Dark”, stopping time to enfold us in a moment of romantic rapture. Ah, Gloria, my dear, there you are…