Keith Jarrett’s ‘After the Fall’ 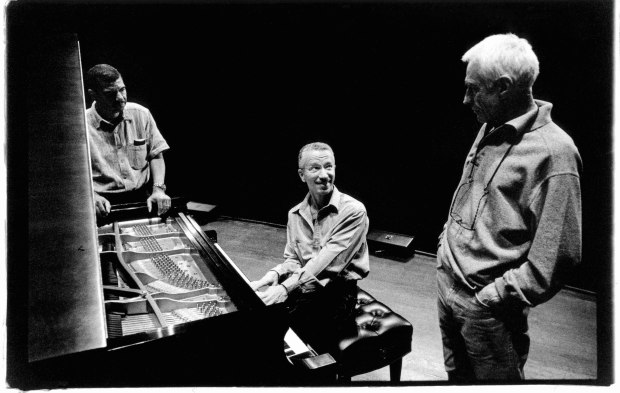 In the summer of 2000 I spent an hour across a table from Keith Jarrett in a rooftop restaurant overlooking the Baie des Anges in Nice. Infuriatingly, he chose to conduct the conversation while wearing mirror shades. An interviewer tries to establish some kind of rapport with his/her subject, in which eye contact plays a part; the shades meant that I spent the hour staring at reflections of myself. I thought it was discourteous, and possibly a bit passive-aggressive. Somewhat wryly, I thought back to the morning 30 years earlier when he had wandered unannounced into the offices of the Melody Maker, a couple of days after his appearance with Miles Davis at the Isle of Wight, hoping to persuade someone to interview him.

Anyway, he talked interestingly. He was in Nice with Gary Peacock and Jack DeJohnette, his fellow members of what had become known as the Standards Trio. They were on their first tour since Jarrett’s recovery from a bout of chronic fatigue syndrome, which had left him unable to play for two years. His gradual recovery had been indicated by the release of a solo album titled The Melody At Night, With You. Its gentle, almost unadorned treatments of standards and folk tunes, recorded at his home, make it a special favourite of mine. “I learnt something about playing the piano,” he told me when I asked him about it. “The heart determines where the music comes from, and there was more heart in that recording than there was virtuosity, but what I had as a pianist I put into the heart place, and that can translate into other contexts.” (You can read the whole interview, published by the Guardian, here.)

Now we have a new release of a trio album made during that period (in November 1998, in fact) at the New Jersey Performing Arts Centre in Newark, not far from Jarrett’s home. Called After the Fall, it’s a document — like The Melody at Night — of a man testing the state of his physical powers, on this occasion with the support of his two musical soulmates.

Wanting to keep things simple, they stuck to bebop and standards. “When I first came back to playing, I didn’t want to play as hard,” Jarrett told me in Nice. “I didn’t want to dig in to the piano as much. Bebop was the right thing to do, because there’s a lightness to it.” But isn’t bebop a notably athletic and competitive idiom, perhaps unsuited to convalescent therapy? “Yes, but it’s light-footed, if you think about it. Playing in large halls with the trio, and trying to project to the people, I ended up playing hard, and I didn’t want to do that. With bebop the phrasing is more like a voice phrasing, because most of the bebop players – except maybe Bud – were horn players. I wanted to have a chance to phrase like that.”

There’s no sense of frailty in evidence. Instead there’s a leanness and a clarity that make it exceptional. Jarrett is a great bebop player: a passage six minutes into Bud Powell’s “Bouncin’ with Bud” finds him unspooling a line that would make the tune’s composer stand and applaud, and there are moments of similar exhilaration on Charlie Parker’s “Scrapple from the Apple” and John Coltrane’s “Moment’s Notice”. He plays the blues elegantly on Pete La Roca’s “One for Majid”, produces characteristically lustrous ballad readings of “Late Lament” and “When I Fall in Love”, and exposes his sense of humour on “Santa Claus Is Coming to Town”. A 15-minute version of “The Masquerade Is Over” devolves from its medium-up tempo through a beautiful collective transition into the coolest lope imaginable, while a 13-minute “Autumn Leaves” ends on a glorious Latin groove, rocking along to Peacock’s bass riff .

The fact that many of these tunes feature on the trio’s earlier albums shouldn’t deter anyone from investigating After the Fall. This is Jarrett with the shades off, the defences down, temporarily shorn of the extremes of his virtuosity but looking us straight in the eye. The music’s limitations, such as they may be, turn out to be the foundation of its strength.

* After the Fall is out now on the ECM label. The photograph of Jack DeJohnette, Keith Jarrett and Gary Peacock is by Patrick Hinely.