The Weather Station in Islington 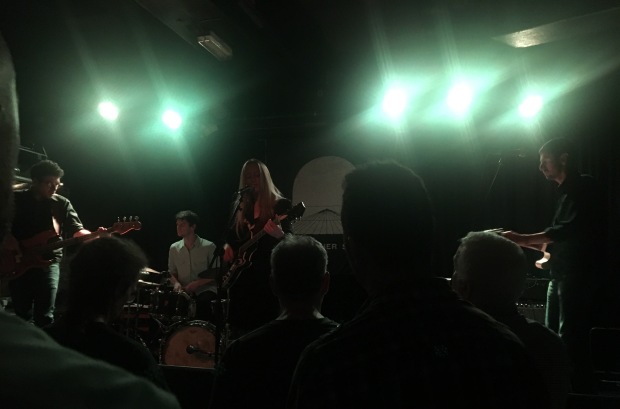 A few hours ahead of her gig with her band, the Weather Station, at the Lexington pub in Islington last night, the Canadian singer-songwriter Tamara Lindeman tweeted a photograph she’d taken during a walk along the nearby Regent’s Canal. “Sandy Denny in headphones,” she added. Sandy would have been pleased by the compliment and intrigued by her admirer’s performance, and in particular by the way Lindeman managed to make the 50-year-old concept of folk-rock sound brand new.

The Weather Station’s new self-titled album embraces electric guitars in a characteristically modest and subtle way. Lindeman took the stage at a sold-out Lexington with the lead guitarist (and occasional organist) Will Kidman, the bass guitarist Ben Whiteley, and the drummer Erik Heestermans, and made the relatively new approach sound like the most natural thing in the world.

Perhaps the key was her rhythm guitar playing, the core of the sound, the central strum and the enunciator of chord patterns that move between the comfortingly familiar and the ear-teasingly sophisticated, unpushy but generating real momentum behind melodies that are liable to soar at unexpected moments. The other instruments arranged themselves around her with discreet sensitivity, leaving plenty of space for us to appreciate the care with which she modulates her tone and enunciates her extraordinary lines.

There were lots of songs from her last two albums, among them “Way It Is, Way It Could Be”, “I Mined”, “Floodplain”, “Tapes”, “I Could Only Stand By” and “Impossible” (with organ drone and galloping tom-toms) from Loyalty and “Free”, “Thirty”, “Kept It All to Myself”, “Black Flies” and “You and I (On the Other Side of the World)” from the new one. A short central solo acoustic segment expanded to a duo when she was joined for one song by Will Stratton, the American singer-songwriter who had provided a pleasant support set.

What was interesting about seeing her live was the way her lyrics were given, if anything, even greater value. Some of these songs are like the deepest conversations you ever had with someone you care about — and very often they’re like things that were formulated but somehow never got said. On the faster songs she piles lines on top of each other to create a river of thought and feeling. And none of the nuances are lost when she sings them with a band in front of an audience.

Lindeman doesn’t do stage dramatics or ingratiation. When a song ends (and her endings, whether abrupt or lingering, are always worth attention), she tends to make no acknowledgment of applause but goes straight into adjusting her tuning for the next song. Yet there’s no distance between her and her listeners. Although her spoken comments tend to be restricted to dry asides, she radiates a warm intelligence; her fleeting changes of expression — a grimace at a fluffed entrance, a small and mysterious smile now and then — say most of what she needs to convey. By the end of the evening I don’t suppose there was a man or a woman in the place who wasn’t a bit in love with her.

* The Weather Station play tonight (October 24) in the Eagle Inn, Salford and tomorrow at the Music’s Not Dead record shop in Bexhill on Sea (free, 7pm). They’ll be back for another UK tour in January and February. The new album is on the Paradise of Bachelors label.