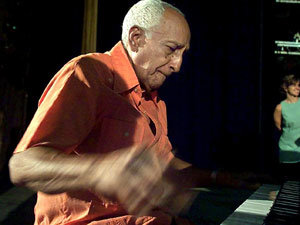 Donald Trump’s attempt to turn the United States back into the country once shaped by Richard Nixon and J. Edgar Hoover took another step today when he signed a document reversing Barack Obama’s rapprochement with Cuba. There’s probably not much most of us can do about that, except maybe book a holiday there to replace the Americans who will no longer be able to travel to the island so easily, but it’s a good excuse to mention the reissue in expanded form of Introducing… Rubén González, one of the finest albums to come out of the Buena Vista Social Club phenomenon 20 years ago.

González was 77 years old when he made the album in Havana’s Egrem Studios in 1996 at the behest of Nick Gold, the World Circuit producer, yet his playing appeared to have lost none of its zest, clarity and inventiveness from the days when he played in the bands of Arsenio Rodriguez in the 1940s, René Álvarez in the ’50s and Enrique Jorrín in the ’60s. With a group including the bassist “Cachaito” López and the trumpeter “Guajiro” Mirabal, he sparkled through cha-chas, boleros, guarachas and other forms with great elegance and poise. Maybe it doesn’t have the crackly patina of old recordings from pre-revolutionary Havana, but it’s one of the most important Cuban albums of modern times, and — now with one extra track and three others expanded through the restoration of edited passages — it deserves to be a cornerstone of any respectable collection.

* Introducing… Rubén González is reissued by World Circuit on vinyl and CD on June 16. The photograph of González is from the album insert and was taken by Cristina Piza.