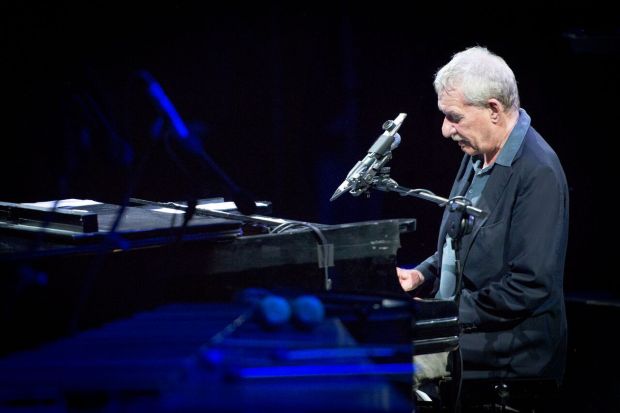 An all-instrumental album from Paolo Conte: that would be like an episode of The Sopranos without Tony, right? Well, not exactly. He doesn’t sing on Amazing Grace (although he does mutter the word “Tips” at the beginning and end of the short track of that name), but in its way this is still an album of full-strength Conte, offering perspectives that don’t normally get exposed.

It is, he says, a collection of “recordings made at different times (from the ’90s to the present day), for soundtracks of theatre productions and for study and experimental purposes, that I had very carefully tucked away at the back of various drawers”. He was right to decide that they needed to be exposed to the light of day.

There are 23 pieces, ranging in length from 61 seconds to six minutes, and in style from clarinet ballads and a tango for piano and bandoneon to romantic string quartets and soulful wind chorales and a sweeping orchestral piece, and a lovely, pensive fragment for solo piano called “Gli Amici Manichini” that sounds like it was recorded on primitive equipment in some deserted hotel ballroom 100 years ago. That last item is one of six written for a theatre piece called Il Ballo dei Manichini, of which the final work is the only song of the set: a jaunty pop number called “Changes All in Your Arms” sung by two women, Ginger and Rama Brew, as if they’re gathered around a pub piano.

Maybe the best of all is a track called “P.U.B.S.A.G. (Passa Una Bionda Sugli Anni Grigi)”, its lyrical theme stated by the trumpet of Alberto Mandarini and the clarinet of Massimo Pitzianti, supported by Jiri Touche’s double bass and Daniele Di Gregorio’s drums, Conte’s piano nudging them along with simple and unhurried but exquisitely timed phrases. And it’s followed immediately by the title track, another gloriously melodic reverie in the form of a trio for piano, bass and Di Gregorio’s vibes.

Perhaps I wouldn’t swap these pieces for favourite songs like “Alle Prese Con La Verde Milonga” or “Los Amantes Del Mambo”, but it’s amazing how the pungency of his character comes through even when he denies us the pleasure of the rasping voice, with its characteristic combination of world-weary wisdom and irrepressible youthfulness, of a man — a unique and precious jewel of our musical world — who will turn 80 next month.

* The photograph is by Dino Buffagni. Amazing Game is out now on the Decca label.