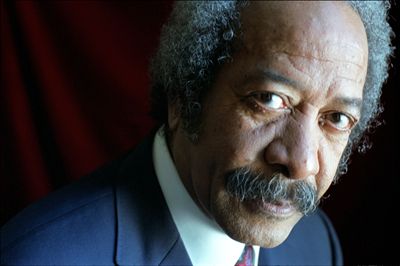 When someone like Allen Toussaint dies, you go straight to your record collection. In this case the first disc I pulled out was Lee Dorsey’s “Freedom for the Stallion”, one of the most quietly moving songs to come out of the civil rights era: “Big ships sailing / Slaves all chained and bound / Heading for a brand-new land / That some cat said he upped and found / Lord, have mercy, what you gonna do / About the people who are praying to you / They got men making laws that destroy other men / They made money, Lord, it’s a doggone sin / Oh Lord, you got to help us find a way.”

Toussaint’s mournful arrangement — the slow-drag snare and bass drum, the rolling piano, the funeral-band horns — creates the perfect setting for Dorsey’s reflective vocal. There’s a great little moment at 2:24 when the tenor player starts testifying, as though unable to help himself. Such beauty.

And then Betty Wright’s “Shoorah Shoorah”, which Toussaint didn’t produce or arrange. What a song, though, inspiring a performance from a singer in delicious torment: “I check you out from the corner of my eye / You and the Devil walking side by side / You ain’t changed, let’s be real about it / And I can’t change how I feel about it.” Like Curtis Mayfield, Toussaint had a deep and natural understanding of the human condition.

Finally, here’s one he arranged and produced but didn’t write: Lou Johnson’s version of Burt Bacharach and Hal David’s “Walk on By”, in which an uptown song is taken for a ride all the way down to the edge of town, right where the swamp begins.

I spent a couple of hours with Toussaint last year, at the behest of Uncut magazine. He was wonderful value as he talked about his long history, beginning with learning to play boogie-woogie on the piano during his New Orleans childhood. “I was brought up very Catholic – a lot of Bach and classical music,” he told me. “But I heard a lot of gospel music in the baptist and holy-roller churches around the neighbourhood, and I fell in love with it, just like boogie-woogie. I first heard Professor Longhair on record, and I thought, ‘Good heavens – this is the way I want to go.’ I knew he was from New Orleans, but I wasn’t of an age where I could be where he was performing. All the kids around who tinkered with the piano, we all tried to play like Professor Longhair. One kid would have a few more notes of his music than the rest, and we’d feed off each other. So we came up as his disciples. My mother listened to Strauss and so on, so I heard that, and on the radio there was a lot of hillbilly music with the tinkling saloon pianos, and I loved that, too. It wasn’t hard to get that kind of sound, once you knew the formula. And I loved polkas. So I just found myself having equal respect for all of the genres, and everything I heard, I began trying to play.”

It’s all there, from “Do-Re-Mi” through “Fortune Teller” and “Mother in Law” to “Everything I Do Gonh Be Funky” and “Yes We Can”, and on to the fabulous Bright Mississippi album of 2009: the music of a very great man.