Visions of A Love Supreme 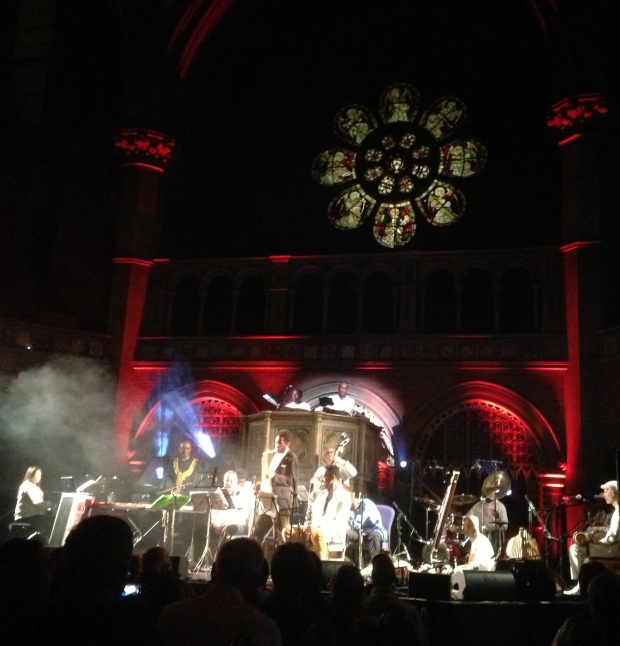 “Welcome to the London branch of the Church of St John Coltrane,” the writer, editor and concert promoter Paul Bradshaw said, introducing last night’s event at the Union Chapel, the loveliest of the city’s performance spaces, featuring Rowland Sutherland’s Enlightenment, a large-scale “re-envisioning” of A Love Supreme.

It was 50 years to the day since Coltrane, McCoy Tyner, Jimmy Garrison and Elvin Jones settled into Rudy Van Gelder’s studio in Englewood Cliffs, New Jersey, to record their masterpiece in a single session. Sutherland’s 90-minute version involved himself and 14 other musicians working their way through an unbroken sequence of episodes that sometimes took direct inspiration from the work in question and at others explored underlying or suggested tendencies, taking in and finding ways to use the implications of Coltrane’s music both before December 9, 1965 and in the further year and a half preceding his death.

The piece began quietly with the strings of the tamboura and the kora, evoking the cultural wellsprings — India, West Africa — from Coltrane drew as he drove his music forward through the ferment of the early 1960s. Ogunbe and Watkiss recited devotional verses, starting with words from the Hindu mystic Swami Satchidananda and later using lines adapted from the 69-line poem that Coltrane included on the sleeve of the original album (“I will do all I can to be worthy of Thee O Lord…”). Watkiss scatted inventively and Ogunbe, alongside him in the chapel’s high pulpit, sang powerfully in Yoruba. Occasionally they were joined by the chants of the three bata drummers, lined up on the extreme right of the stage.

Even those who don’t get on with late Coltrane would have conceded that this ensemble brought not just passion but clarity to the methods the saxophonist used in the last months of his life, when he invited additional musicians to join the basic group (something he had been doing, in fact, since the celebrated 1961 recordings at the Village Vanguard) in order to explore the possibilities of the musical equivalent of “speaking in tongues”. This was the development of a new (to the western world) language of ecstasy and catharsis, and it continues to divide opinion.

There were strikingly effective solos last night from a poised Yeoh, a ferocious Williamson, a wild Hutchings, a volcanic Mondesir, an entrancing Robinson and a cunning Thomas (who, as my friend Jody Gillett pointed out, “likes to keep the rest of them on their toes”), from Biswas on santoor (a small Indian cimbalom), and from Stavi, who produced an improvisation that fused Garrison’s suppleness with Charlie Haden’s spiritual power, provoking an ovation from the large and attentive audience.

Waves of energy surged back and forth across the stage, separated by passages of luminous serenity. A judicious pruning of 10 minutes or so might have done no harm, but even the most hardened atheist (that’s me) would have found it difficult to remain unmoved by the depth and intensity of these musicians’ creative response to one of jazz’s great cornerstones, sharing with us its undiminished power to inspire and uplift.