A benefit for Kenny Wheeler 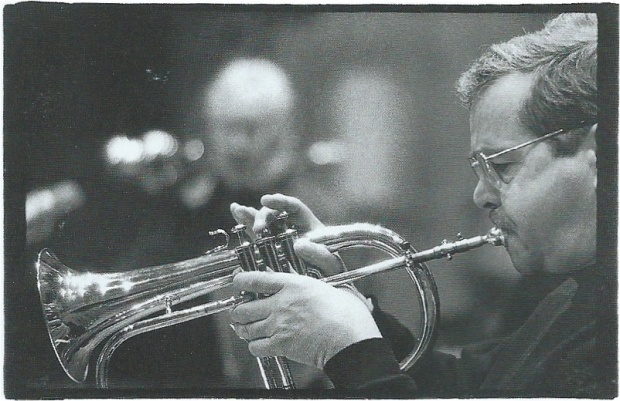 Few important musicians have made more noise with less fuss than the trumpeter, flugelhornist, composer and bandleader Kenny Wheeler. A vital figure on the British scene since his arrival in London from his native Canada in 1952 at the age of 22, he emerged from early employment with dance bands to create a reputation that flourished despite a temperament for which such words as “modest” and “retiring” seem entirely inadequate.

Kenny is a musician of immense range. I’ve been listening to some of his early work lately, with the saxophone-playing racing driver Buddy Featherstonhaugh’s excellent pianoless quintet of 1956, which recorded a couple of EPs for Pye, and also to his classic ECM album of 1997, Angel Song, with a fabulous quartet completed by Lee Konitz, Bill Frisell and Dave Holland. In between he contributed to any number of great records, among which I particularly cherish two classics of the early British avant-garde, as nurtured at the Little Theatre Club: the Spontaneous Music Ensemble’s Karyobin (Island, 1968) and Tony Oxley’s The Baptised Traveller (CBS, 1969).

Problems with his own and his wife’s health have meant that, at the age of 84, Kenny has been unable to play for some months. For his benefit, his old friend and colleague Evan Parker has organised a concert tomorrow night — Friday, August 15 — at a place called Epic, 13-15 Stoke Newington Road, London N16 8BH (admission £12-£10). A stone’s throw from the Vortex and Cafe Oto, the gig will feature the altoist Ray Warleigh’s quartet, a group with Parker, Steve Beresford, Olie Brice and Mark Sanders, the Alison Blunt Ensemble (including the violinists Dylan Bates and Phil Wachsmann), and Reuben Fowler’s big band playing some of Kenny’s charts.

Kenny won’t be playing, but John Coxon of Spring Heel Jack — with whom he also recorded to great effect — will be at the turntable between the sets, playing some of his records and reminding us of his audacious imagination, as well as the purity of tone and elegance of articulation that put him alongside Booker Little in a line of trumpeters stretching from Joe Wilder to Ambrose Akinmusire.

* The photograph of Kenny Wheeler was taken by W. Patrick Hinely (Work/Play) for the booklet accompanying Angel Song (ECM 1607).