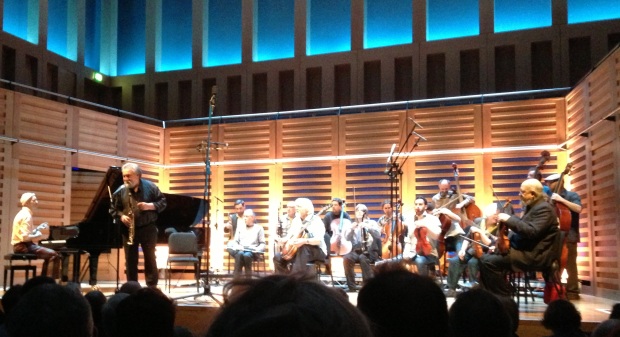 In Munich for a football match a few years ago, I had a couple of hours to spare in the afternoon and paid a visit to Ludwig Beck, a department store on Marienplatz, the city’s central square. To me it’s a shop remarkable for its vast jazz department, where on the day in question I was able to count no fewer than 72 CDs by the improvising saxophonist Evan Parker: an indication of the esteem in which he is held in some parts of the world.

Tonight at Kings Place in London there was a concert in celebration of Parker’s 70th birthday. (Ten years ago, I interviewed him for the Guardian on the occasion of his 60th: here it is.) Talking to Sebastian Scotney in the current Kings Place magazine, he said this: “I like to have a space with an inspiring and supportive acoustic, a church or a church-like space. What I do in that context is more about intuition than analysis. There are things you try to control, with new combinations of reed behaviour and embouchure and cross-fingering. But that’s the starting point. The complexity of the partials and the overtones and the resonance will always be unique in the moment, and in the particular acoustic of the performance space. The saxophone is such a rich and flexible acoustic source, I will certainly run out of time before I discover all its possibilities.”

The concert featured 18 musicians: Phil Wachsmann, Alison Blunt, Sylvia Hallett and Dylan Bates (violins), Benedict Taylor and Aleksander Kolkowski (violas), Hannah Marshall, Alice Eldridge and Marcio Mattos (cellos), John Edwards, Adam Linson and David Leahy (basses), Django Bates (piano and peck horn), John Russell (guitar), Percy Purseglove (trumpet), John Rangecroft (clarinet), Neil Metcalfe (flute) and Parker himself. The first half consisted of collective improvisations by three quartets and two trios, the most effective of them consisting of Parker on tenor with Edwards and Russell, although Purseglove’s playing with the final quartet (rounded out by Bates, Hallett and Eldridge) sounded like the outstanding individual contribution. But nothing really caught fire: each group featured bowed strings in some form, and there was too little textural variety.

For the second half all 18 musicians were assembled, and it became obvious that what the earlier music had lacked was a bit of mass and density. Parker led off on soprano, chewing up staccato phrases as the rest joined in. There was clearly some form of organisation, although evidently nothing in the way of themes or other notation, and the music gradually assumed tonal and dynamic shapes, sometimes creating an unstated but felt pulse (* see note below).

Again the strings dominated the sound, but the increased heft of the ensemble worked wonders. Occasionally the half-hour piece sounded like a concerto for soprano saxophone and chamber orchestra, but other instruments — notably Metcalfe’s pretty flute, Russell’s scrabbling guitar, Bates’s busy piano and Kolkowski’s weird skeletal viola, with its horn from a wire-recording device attached — periodically worked their way to the fore against the swirls, squalls and slow drift.

Parker dedicated the concert to the memory of John Stevens, the great drummer whom he met in 1966 and with whom he played in the Spontaneous Music Ensemble. As he said in his dedication, Stevens was largely responsible for establishing and nurturing London’s free improvisation scene, which remains a vital field of musical research. The evening ended with a short unaccompanied soprano solo, demonstrating the new instrumental language Parker has been developing since those early days at the Little Theatre Club, one that continues to grow in complexity and richness of meaning.

* Alison Blunt read this and got in touch immediately to say that there had been no form of premeditated organisation.