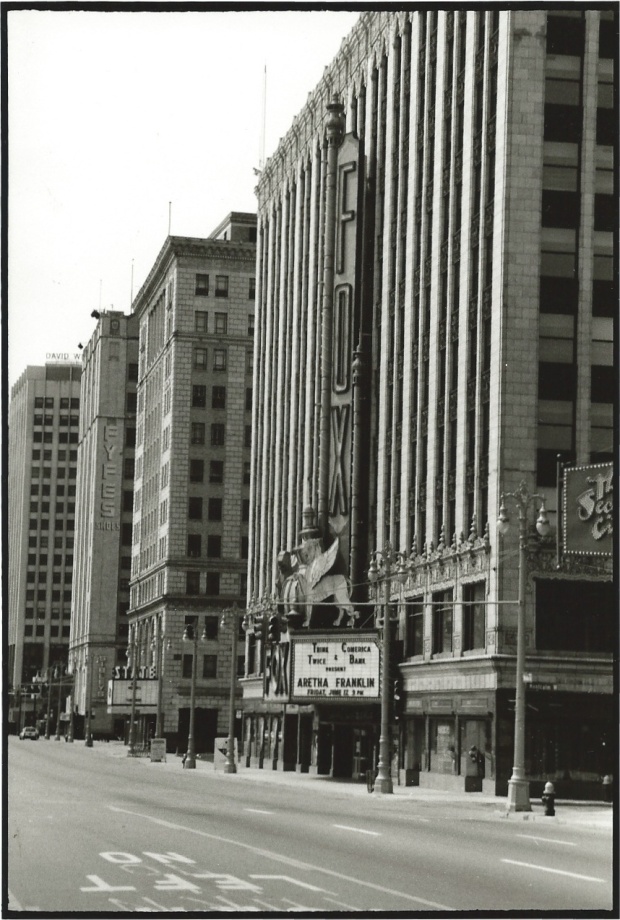 You’ll have read that Detroit went bankrupt the other day, and you might have felt more than a twinge of sympathy for the city that gave us so much music. (The Independent‘s Ian Burrell did, and wrote about it very touchingly here.) You might also have seen The Ruins of Detroit, the 2010 book in which Yves Marchand and Romain Meffre photographed the abandoned hulks of factories and municipal buildings, lending them a terrible glamour. I’m currently reading Mark Binelli’s widely praised The Last Days of Detroit, in which a Rolling Stone journalist returns to examine the fate of his home town. It made me go and dig out a photograph I took in 1994, during the World Cup, when I was in Detroit to watch Brazil play Sweden in the Pontiac Silverdome.

This is not a photograph of a ruin. Quite the reverse, in fact. It shows the Fox Theatre, a famous establishment on Woodward Avenue in the downtown area. Opened in 1928, with 5,000 seats, lavishly appointed and built at great expense, it became the world’s first cinema to install sound equipment for the screening of talkies. Live shows were also a part of its programme: Swing Era stars like Benny Goodman packed the place, Elvis Presley played there for three nights in 1956 (his first appearances in the city), and the Motortown Revue got into the habit of taking over the theatre for 10 days over the Christmas period in the ’60s. By the 1980s, however, “white flight” to the suburbs had changed the character of downtown and the heavily dilapidated Fox was showing kung-fu movies. Then along came the family who own the Little Caesars pizza chain, the Detroit Red Wings (ice hockey) and the Detroit Tigers (baseball), who bought and renovated it, re-opening in 1988 with a show starring Count Basie and Smokey Robinson.

The day I passed by with my camera, the marquee was still advertising an Aretha Franklin concert which had taken place a week earlier. (Detroit is also Aretha’s home town: it was where her father, the Rev C.L. Franklin, set up his New Bethel Church in 1946.) A check on the Fox’s website tells me that this year’s future attractions include Steely Dan, John Legend, Get Back: The Beatles Laser Experience, Sarah Brightman and the Moscow Ballet. Aretha sang there again last year.

Hope you like the picture. And good luck to Detroit, whatever its future holds.