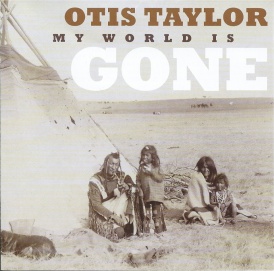 When Otis Taylor was 16 years old, back in 1964, he got his picture in the local paper for playing a five-string banjo while riding a unicycle. By coincidence, that was the year in which my fellow bandmates and I, only a year or two older than Taylor, clubbed together to buy a bottle of Johnny Walker Red Label whisky with which to lure John Lee Hooker into talking to us between his sets with Tony McPhee’s Groundhogs at the Elizabethan Rooms in Nottingham, a dance hall above the Co-operative store in the city centre. The coincidence lies in the fact that when I listen to Otis Taylor, I always think of Hooker, a great hero to those of us who were trying with such desperate earnestness, several thousand miles and an entire culture away from the birthplace of the blues, to learn its language.

Taylor, who is now 64, approaches the blues with the same elemental attitude as Hooker. Most of his songs have one chord, sometimes two. Time seems to stop while he plays, as it did with John Lee’s boogies. He comes from a more sophisticated background — his parents, he once told me, listened to John Coltrane and Dave Brubeck, while he spent his early teenage years hanging out at the folklore centre in Denver, Colorado, where the family had moved from Chicago — but his blues, like Hooker’s, stay closer than most to their, and his, African roots.

Taylor came to London in the late 1960s as a solo blues singer, guitarist and banjoist. He supported Fairport Convention at the Roundhouse and was scheduled to record for the Blue Horizon label until a disagreement over musical policy put an end to the plan. He went home and spent the next few decades running an antiques business and a bicycle racing team until resuming his career in the mid-1990s with the first of a string of albums of his “trance blues”, of which My World is Gone (Telarc) is the 13th.

This latest sequence of songs concentrates on the world of the American Indian. Like Harry Smith in the notes to the Anthology of American Music, he adds little glosses to the title of each song: “A man stops drinking, hoping that his lover will come back”, “A Navajo man loses his horse from drinking too much”, or “A young man recounts the tale of his mother’s murder, where men came with crosses in the middle of the night.”

“I used to be told that what I did wasn’t cool,” he told me. “They said, ‘You don’t use chord changes and your songs are depressing. People want chord changes and happy songs.’ But that’s the way it is. Appalachian songs can be pretty depressing, too. Even Dolly Parton gets depressing sometimes.”

The arrangements — for various combinations of guitar, banjo, bass, tuba, drums, fiddle, cornet and organ — are simple but often imaginative. On “Huckleberry Blues”, for example, a flickering banjo strum builds an incessant groove over Todd Edmunds’ mobile funk bass in the manner of the guitar on Isaac Hayes’s Shaft theme, while Ron Miles’s cornet adds a spare, lyrical counterpoint to Taylor’s weathered voice. Brian Juan’s Booker T-ish Hammond B3 is a highlight of “Never Been to the Reservation”.

Almost half a century after my pals and I persuaded Hooker to sit down with that bottle of Scotch, the whole round world is fluent in the language of the blues. Not many of today’s people, however, speak it as convincingly as Otis Taylor, whose authenticity comes not just from his background and his musicianship but from his ability to find the common ground between past and present, and thereby to make his music seem as timeless as the human condition it describes.