Probably the best compliment I can pay to Todd Haynes’ Velvet Underground documentary is to say that it’s made in the spirit of the music. His switchblade editing, abundant use of split-screen and fantastic material from all sorts of archives creates a tone parallel to the sounds we’re hearing and to the lives we’re watching.

An important decision was not to include testimony from anyone who wasn’t actually a witness to the events the film records. Every voice you hear bears the glory and the wounds of what happened in that short time when Lou Reed, John Cale, Sterling Morrison, Maureen Tucker and Nico rewrote the rulebook. Cale is wonderfully engaged with a story that, for him, ended badly. Tucker still sounds like the real glue of the band. The voices of the departed members are heard in archive interviews. Among others who shed light are the veteran avant-garde filmmaker Jonas Mekas, the actress Mary Woronov, the superfan Jonathan Richman, the composer La Monte Young, the scenemaker Danny Fields, Merrill Reed Weiner, Lou’s sister, and Martha Morrison, Sterling’s wife. (No Gerard Malanga and only the briefest glimpses of Edie Sedgwick, which is a bit of a surprise.)

It’s quite a demure film, given the milieu; the sexual merryground is glimpsed but not explored. Neither is Haynes interested in deep musicology. He wants impressions rather than details, which keeps the film moving. He doesn’t try to analyse the divide in Reed’s personality between the brutal and the tender. But we do get a feeling for the characters, as when Cale sums up Nico quite beautifully: “She was a wanderer. She wandered in and she quietly wandered out again.” And we certainly get an idea of how the chemistry between Long Island doo-wop fan Reed and Welsh avant-gardist Cale turned 56 Ludlow Street on the Lower East Side into such a potent musical laboratory. Haynes leaves us with a lovely colour clip of Reed and Cale performing “I’m Waiting for My Man” during their reunion at the Bataclan in Paris in 1972, with Nico waiting in the wings.

Throughout the film, the great songs — “Venus in Furs”, “Heroin”, “Sister Ray”, “White Light/White Heat”, “Pale Blue Eyes”, “Rock and Roll”, “Sweet Jane” — are allowed to emerge in the perfect setting. And as they issue from big cinema speakers, you may yourself experiencing once again the seismic effect they had when you first heard them, brand-new. There were times when I wanted to cheer. 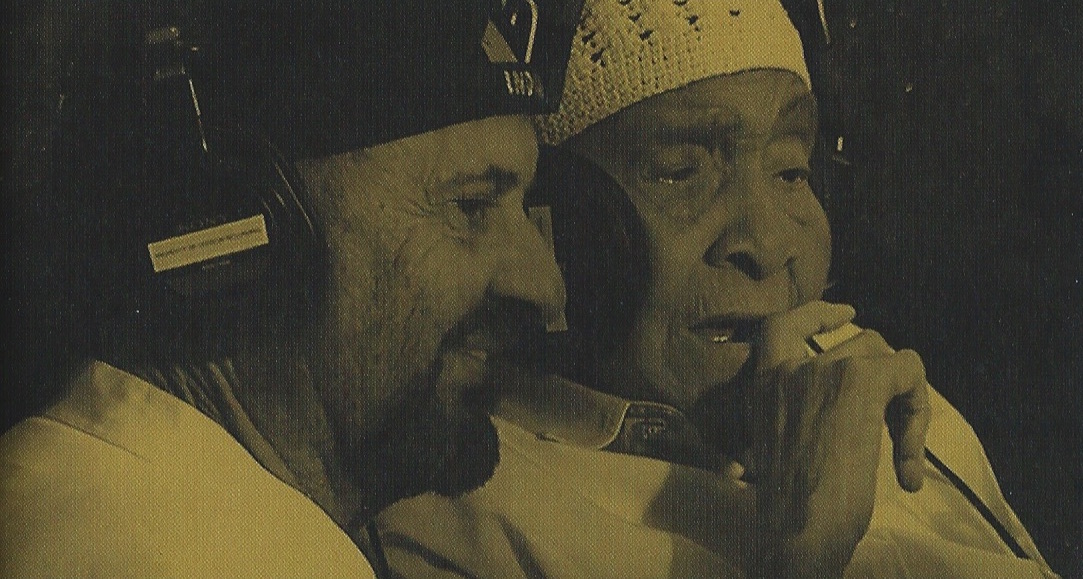 When the great ballad singer Jimmy Scott returned to action in the early ’90s, in a rediscovery primed by appearances on Lou Reed’s Magic & Loss and in David Lynch’s Twin Peaks, the surge of interest resulted in his recordings becoming widely available. They ranged from carefully curated collections of his work for Decca and Savoy in the 1950s (when he was known as Little Jimmy Scott) to new albums produced for Sire and Milestone by Tommy LiPuma, Mitchell Froom, Todd Barkan and others. There was also, finally, the reappearance of two legendary albums from the 1960s suppressed when Herman Lubinsky, the notoriously vindictive owner of Savoy, claimed that Scott had recorded them in breach of an existing contract: Falling in Love is Wonderful, produced in 1962 by Ray Charles for his own Tangerine label, and The Source, supervised by Joel Dorn for Atlantic in 1969.

Lubinsky’s action cost the singer what should have been the prime years of his career, but we were lucky to have him for the last 20 years of his life, until his death in 2014 at the age of 88. In that final phase, hardly surprisingly, his pipes were not what they had once been, but it wasn’t mawkish to feel that the signs of ageing added an extra poignancy to his interpretations. His marvellous phrasing was certainly unimpaired, and the wide vibrato still touched the heart.

Now, three years after his death, comes an album called I Go Back Home, the fruit of his final recording sessions, held in 2009, in which the German producer Ralf Kemper surrounded him with sympathetic musicians, arrangements, and guests. Sometimes, as in “Poor Butterfly”, Scott speaks the lyric, allowing the French harmonica player Grégoire Maret to add melodic decoration. Elsewhere, as on “Sometimes I Feel Like a Motherless Child” and “How Deep is the Ocean”, his singing has a surprising strength. There are duets with Dee Dee Bridgewater on “For Once in My Life”, with Oscar Castro Neves on “Love Letters”, and with Renee Olstead on “Someone to Watch over Me”. There are tracks featuring other distinguished instrumentalists: the pianist Kenny Barron, the organist Joey DeFrancesco, the tenorist James Moody, and the trumpeter Till Brönner (who displays a delicate lyricism on “If I Ever Lost You”). There are gentle and wholly appropriate string and woodwind arrangements by Mark Joggerst. There is a beautifully warm and clear mix by Phil Ramone.

The big surprise, however, comes in one of the two songs that do not feature Scott at all but are billed as “tributes” by other singers. It’s a version of “The Folks Who Live on the Hill”, the Kern/Hammerstein song that Scott recorded — featuring the seldom-sung introduction — during a 1972 Dorn-produced session which remained unheard until the release of a Rhino/Atlantic album titled Lost and Found in 1993. But this time the singer, paying tribute to his old friend and influence, is the actor Joe Pesci.

We know that Pesci grew up in New Jersey alongside Frankie Valli, and that he had early ambitions as a singer. In 1968 he released an album under the name Joe Ritchie titled Little Joe Sure Can Sing! on the Brunswick label, produced by Artie Schroeck (who arranged Valli’s “Can’t Take My Eyes Off You”), featuring covers of things like the Bee Gees’ “To Love Somebody”. When it didn’t make waves he switched first to stand-up comedy and then to an acting career that took him to the heights of Raging Bull, Goodfellas and Casino.

His dead-slow version of “The Folks Who Live on the Hill” — one of my very favourite ballads — is good enough to make you wonder what might have happened had he stuck with the singing thing. His delivery is very much in Scott’s pleading high-tenor register, with subtle echoes of that distinctive vibrato, and occasional manipulations of timbre that seemed to echo the muted-trumpet obligato provided on the track by DeFrancesco, switching to his second instrument. Joggerst’s arrangement exudes a glowing serenity, particularly when the rhythm section lays out for a rubato statement of the six-bar bridge before Barron’s piano, the bass of Michael Valerio and Peter Erskine’s brushes pick it up for the final 12 bars.

I never thought I’d hear a treatment of this song to rival the enchanting version recorded by Peggy Lee with Nelson Riddle in 1957. This one does. I’ve been playing it for friends, without divulging the identity of the singer. They’ve all been amazed.

Pesci also appears in a duet with Scott on “The Nearness of You”, and if you’re only half-listening you might not even notice where one begins and the other ends. So that’s an unexpected reason for investigating I Go Back Home, which stitches the final notes of a fabulously gifted and original singer, one matched as an interpreter of torch songs only by Billie Holiday and Shirley Horn, with tender care into a loving hour-long tapestry of sound.

* The photograph of Joe Pesci and Jimmy Scott together in the studio is from the booklet accompanying I Go Back Home, which is released on January 27 on the Eden River label.

A threnody for Lou Reed

It’s already a year since Lou Reed died. You could mark the anniversary by saving up for the new super-deluxe edition of the Velvet Underground’s third album, now expanded to six CDs through the addition of alternative mixes and live stuff, or by reading the updated version of Jeremy Reed’s biography, Waiting for the Man. Or you could make a lateral move and listen to Transmigration of the Magus, written and recorded by John Zorn in memory of his late friend.

Just released on Zorn’s own Tzadik label, the album features the composer’s well established Gnostic Trio — Bill Frisell (guitar), Carol Emanuel (harp) and Kenny Wollesen (vibes and bells) — plus John Medeski (organ), Bridget Kibbey (harp) and Al Upowski (vibes and bells). The instrumentation along gives you an idea of what the music sounds like: a bright celestial noise reflecting Zorn’s interest in the numinous and his desire to write something to help Reed’s spirit through the bardo — the Tibetan word for the transitional state between death and the next incarnation.

Somewhere beneath the profanity of Reed’s music, the sacred was always lurking — whether in the exquisite melody of  “Pale Blue Eyes” or in Songs for Drella, the lovely elegy he and John Cale wrote for Andy Warhol. It’s not hard to glimpse him in the shimmering, tinkling haze of Zorn’s heavily arpeggiated compositions, but easier still in the handful of pieces where, without breaking the poise or the delicate weave of the ensemble, Frisell and Medeski get the chance to cut loose.

At the London Jazz Festival last week I listened to Frisell and Greg Leisz playing electric guitars on “Tired of Waiting for You” and “Turn! Turn! Turn!” during the Guitar in the Space Age! show and was struck by how the silvery quality of the combined strings and a general feeling of ascension reminded me of two other partnerships: Television’s Tom Verlaine and Richard Lloyd and the Grateful Dead’s Jerry Garcia and Bob Weir. Frisell is equally wonderful here. The title track of Transmigration of the Magus is one of the loveliest and most powerful things I’ve heard all year.

* The photograph of Lou Reed and John Zorn was taken by Heung Heung Chin at (le) Poisson Rouge in New York City on September 2, 2008, at a concert in celebration of Zorn’s 55th birthday.