So much has been written about the documentary based on unseen footage from the 1969 Harlem Cultural Festival that you won’t really be needing another recommendation from me. But among all the performances assembled by the director, Ahmir “Questlove” Thompson, from the series of concerts in Harlem’s Mount Morris Park — now known as Marcus Garvey Park — during that summer 52 years ago, there are some things in particular that I wouldn’t want you to miss.

The gospel sequence, which begins with the profoundly thrilling sound of Dorothy Morrison’s deep contralto leading the massed Edwin Hawkins Singers on “Oh Happy Day”, stands as the foundation of the whole thing. Its climax comes when Mahalia Jackson, feeling unwell, invites Mavis Staples to start off “Take My Hand, Precious Lord”, which the younger woman does beautifully. But then Mahalia, evidently revived by what she has heard, comes forward to join Mavis — and you can sense the bedrock of Manhattan Island shaking to the majestic roar of their voices.

It’s like one generation handing the torch to another, and there’s quite a lot of that feeling throughout the film: the elaborate stage costumes of the Fifth Dimension and the straw-thin David Ruffin giving way to the hippie threads of Sly and the Family Stone being one example, the contrast between restrained mohair-suited blues of B. B. King and Nina Simone’s closing recital of a challenging poem by the Last Poets’ David Nelson being another. As someone says, this “was when the negro died and Black was born.” (Ruffin, by the way, had just left the Temptations and sings “My Girl” magnificently, wringing the neck of his extraordinary falsetto.)

The director uses standard documentary techniques — a strong gallery of talking heads and the deployment of newsreel footage — but there were times, particularly in the opening sequences, when I thought he’d been influenced by the video montages of Arthur Jafa, whose shows in London and Berlin I’ve written about. That’s a good way to go, although Thompson doesn’t overdo it. The stories parallel to the music are well chosen. The activist Denise Oliver-Velez talks about the Young Lords and the Black Panthers, and Charlayne Hunter-Gault gives a shattering description of her experience in 1961 as the first black female student to be enrolled at the University of Georgia; she went on to become the first black female journalist in the New York Times newsroom.

Of course the deepest impression is left by the knowledge that here are black artists performing to black audiences numbered in the tens of thousands, on their home turf — something on a different scale from the Apollo Theatre a few blocks away. (Harlem was thought to be dangerous territory for white people then, and there are very, very few non-black faces to be seen in these vast crowds.) Sly Stone was also a star at Woodstock that summer, but you can’t watch his “Everyday People” in Harlem without thinking that this spine-tingling performance has gained an extra dimension from the context. And you can see very clearly why Miles Davis (who is not in the film) wanted this audience rather than those who came to see him in European-style concert halls, expecting to hear “My Funny Valentine”.

I remembered, too, the times I’d seen Nina Simone at Ronnie Scott’s or the South Bank, and been irritated and even infuriated by the distance she’d chosen to open between herself and her all-white audiences, expressed in bouts of brusqueness and truculence generally ascribed to a diva’s temperament. To see her in a Harlem park, gently crooning the brand-new “To Be Young, Gifted and Black” to her people, so centred, so serenely beautiful in her Afrofuturist hair and robes and jewellery, made me feel ashamed of those responses from 30-odd years ago. Sure, I loved the music in Summer of Soul, but I also came out of the cinema into a warm London night with a lot to think about.

* Summer of Soul is in cinemas and on the Hulu streaming platform now. Here’s the trailer.

I’ve spent the past few days thinking about the enormous wealth of music I heard last weekend during the first edition of Jazzfest Berlin curated by Nadin Deventer, who selected some very fine artists, devised interesting combinations and highlighted provocative themes while moving the festival’s furniture around sufficiently to make the event feel fresh and new.

Among the things I carried away with me included a surprise encore on the final night with Mary Halvorson joining Bill Frisell for a lovely guitar duet on “The Maid With the Flaxen Hair”, the title track of their highly recommended recent album on the Tzadik label; Kara-Lis Coverdale’s dramatic and absorbing pipe-organ solo recital in the Kaiser Wilhelm Memorial Church; Jaimie Branch’s electrifyingly bold trumpet solos with a quartet driven by the drummer Chad Taylor; the fantastically creative cello solos of Tomeka Reid with Nicole Mitchell’s Black Earth Ensemble, Rob Mazurek’s Exploding Star International and a 12-piece Art Ensemble of Chicago; Kim Myhr’s mini-orchestra of strumming guitars; and Jason Moran’s centenary tribute to the soldier/bandleader James Reese Europe and the Harlem Hellfighters, which moved me more than I had expected.

In a festival-related event, there was also a chance to see the artist Arthur Jafa’s “A Series of Utterly Improbable, Yet Extraordinary Renditions” at the gallery of the collector Julia Stoschek. Having missed it at the Serpentine Gallery last year, I was particularly struck by one of the video pieces, which cut together YouTube footage of James Brown, Jimi Hendrix and Bootsy Collins, and an electrifying 10-minute performance by the gospel singer Lateria Wooten, singing “Nothing But the Blood” with the late Thomas Whitfield’s choir (which you can watch here).

The solo of the festival was played by Ingrid Laubrock with Mary Halvorson’s wonderful octet. Her tenor saxophone emerged from the warm textures of a ballad called, apparently, “No. 60” (the composer numbers her tunes before assigning them names), like Ben Webster taking his turn in an Ellington small group 80 years ago. The tone, the trajectory, the internal balance of the improvisation were all simply perfect. It was a moment of absolute beauty and the effect was spine-tingling,

But most of all I came away with the memory of Moor Mother, otherwise known as Camae Ayewa, a spoken-word artist from Chicago who was heard in several contexts, most notably with her group, Irreversible Entanglements, featuring Aquiles Navarro on trumpet, Keir Neuringer on alto, Luke Stewart on bass and Tcheser Holmes on drums. Her fierce, declamatory recitations seemed like the logical evolution of the poetry-and-jazz explorations of Charles Mingus, Archie Shepp, LeRoi Jones/Amiri Baraka and Jayne Cortez. Over a highly expressive and flexible band, she drove her words home with a caustic power intensified by a command of economy and repetition echoing that of old blues singers. And then, after a short interval, she appeared in a duo with the Art Ensemble’s Roscoe Mitchell, who played his sopranino saxophone as she riffed on phrases borrowed from Muddy Waters and Howlin’ Wolf. Here we had the old and the new, speaking directly to today’s world. 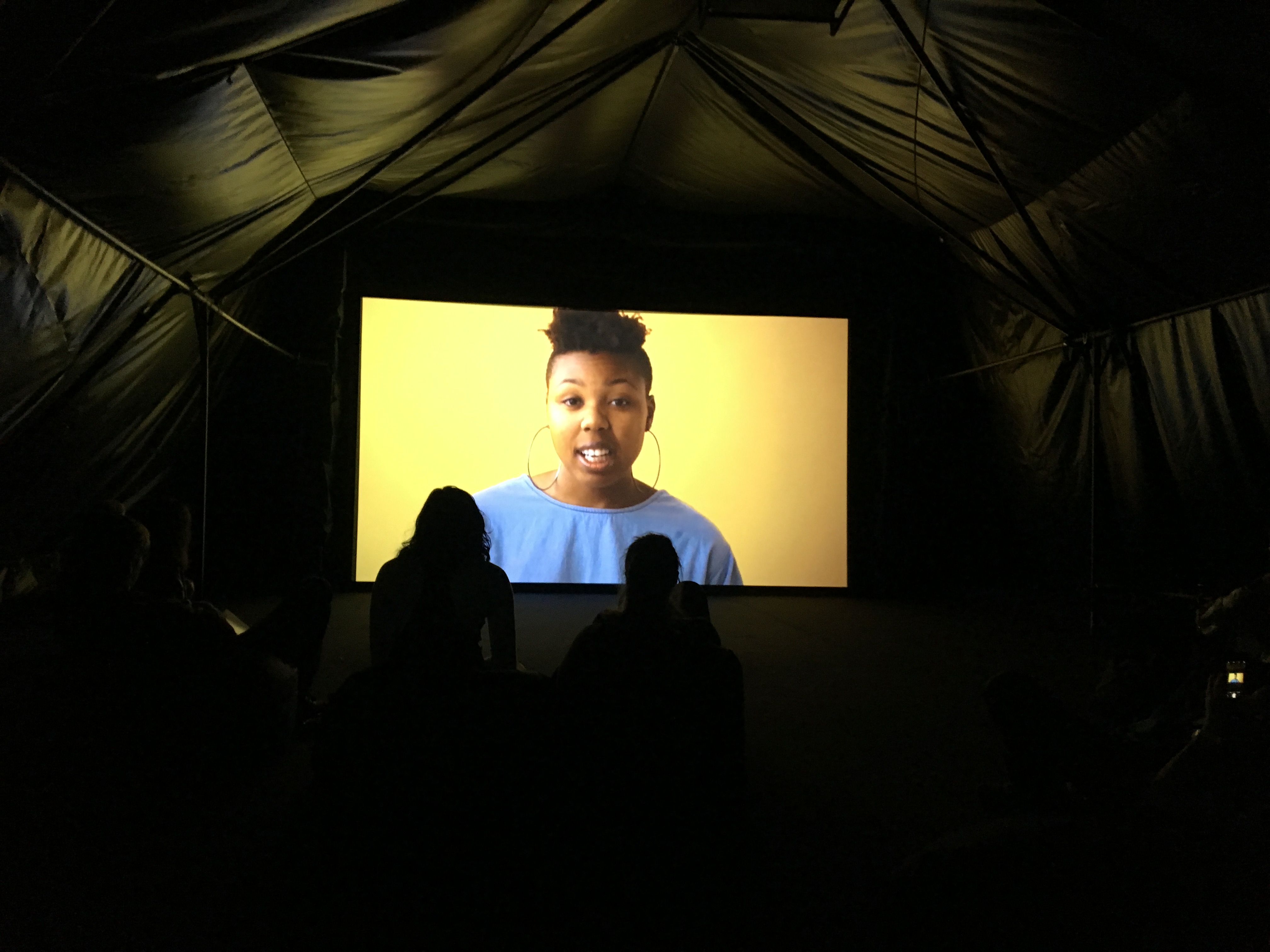 Perhaps you’ve already seen Soul of a Nation: Art in the Age of Black Power at Tate Modern. If you haven’t, you should. It’s full of marvellous things, from the paintings of Romare Bearden, Wadsworth Jarrell and Bob Thompson to the photographs of Roy DeCarava and Beuford Smith via posters and murals and a vitrine full of covers of The Black Panther newspaper. One or two of the later rooms aren’t so compelling, and I was unpleasantly jarred by the mystifying inclusion of Andy Warhol’s portrait of Muhammad Ali. But the whole exhibition, curated by Mark Godfrey and Zoe Whitley, tells a great story and seethes with life.

On the other side of the Thames, there’s something strongly related. Installed in a black tent-like structure on the roof of Store Studios as part of Everything at Once, a kind of de luxe pop-up show in an old brutalist office building at 180 The Strand, overlooking the Shard and the National Theatre, Arthur Jafa’s Love Is the Message, the Message is Death is very different in nature and scale but, because of its contemporaneity, even more affecting.

This is a seven-minute collage of snippets of film from all kinds of sources, set to Kanye West’s “Ultralight Beam”. For those, like me, previously unfamiliar with his 30-year career, Jafa is a cinematographer who was born in Mississippi, lives in Los Angeles, has worked with Spike Lee, directed a couple of the videos for Solange’s masterpiece A Seat at the Table in 2016, and exhibited earlier this year at the Serpentine Gallery.

His new work uses newsreel and found film of black Americans marching, worshipping, performing, dancing, and being threatened, beaten and shot by officers of the law. These images are juxtaposed with footage of heroes: Nina and Aretha; Martin and Malcolm; Miles and Trane; Louis and Jimi; the two MJs, Jordan and Jackson; Serena and Lebron; Ali and Louis Farrakhan; and a 17-year-old Biggie Smalls rapping on a Bedford-Stuyvesant streetcorner. Having started with a clip of Barack Obama at the funeral of the murdered Rev. Clementa Pinckney in Charleston, South Carolina, it ends with James Brown in his ’60s prime.

The whole thing has the rawness of a crude assemblage of video grabs. Hardly anything lasts more than a few seconds, an exception being a harrowing sequence of a mother in distress as she’s ordered from her car by police at night and is handcuffed before her young son makes his way towards them with his hands raised. Jafa occasionally intersperses his chosen clips images with close-ups of the sun and footage from monster movies, whose relevance I don’t really understand. (There’s also a curious decision to include the famous clip of Derek Redmond, the British 400-metre runner, limping to the finish of the Olympic semi-final with a torn hamstring, supported by his father, in Barcelona 25 years ago.)

I suppose I could say that Love Is the Message, the Message Is Death doesn’t tell me anything really new, or make me feel any different. But the cumulative power of the collage is moving and shocking, and Kanye West’s spare, gospel-drenched piece provides the perfect musical accompaniment for the emotions evoked by the sometimes beautiful, sometimes brutal images juxtaposed on the screen. In the Observer, the art critic Laura Cumming called it “a devastating ode to black America”, and I can’t do better than that. I watched it through several times without a break, and I expect I’ll go back for more before it disappears.

* Everything at Once, which is organised by the Lisson Gallery and the Vinyl Factory, also includes work by Ai Weiwei, Marina Abramović, Anish Kapoor, Richard Long, Julian Opie and others, and is on until December 10. Soul of a Nation closes on October 22; there’s a CD of music put together by the Soul Jazz label, featuring appropriate music from Don Cherry, Gil Scott-Heron, Joe Henderson and others. There’s a very good interview with Arthur Jafa here, from Interview magazine earlier this year.