Stepping out with Bobby Parker 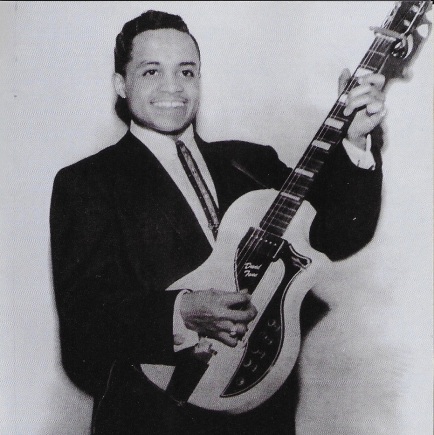 The blues singer and guitarist Bobby Parker’s fame rests on a single record: the 1961 classic “Watch Your Step”, whose driving riff inspired the Beatles’ “I Feel Fine” and Bob Dylan’s “Tell Me, Momma”. I wrote about it here when he died seven years ago. Now there’s a 2-CD anthology of his recordings from 1954 to 1995, called Soul of the Blues and reflecting not only his own career but changes in black music styles during those decades.

It begins with both sides of a 78rpm single by the Emeralds, recorded in Los Angeles in 1954 and released on the Kicks label. Parker’s family had moved to California from Louisiana when he was a small boy; he picked up the guitar in his early teens, formed the Emeralds with friends, and played school dances. In hallowed doo-wop fashion, the A-side is an up-tempo dance tune with a Latin beat, written by the 16-year-old Parker, while the flip is a wonderfully gloopy ballad. It’s a fine start to a lovingly compiled set.

A year later Parker was playing guitar with Bo Diddley: there are three studio tracks here and a version of “Bo Diddley” itself from the Ed Sullivan Show. He moved on to be a featured singer and guitarist with the band of the saxophonist Paul Williams, famous for “The Hucklebuck”: studio recordings from New York in 1956, including “Blues Get Off My Shoulder”, show his proficiency in a variety of styles. Four instrumental tracks, two under Williams’s name and two under that of the tenorist Noble “Thin Man” Watts (including “South Shore Drive”), are perfect examples of the idiom.

“Watch Your Step” is there, of course, is all its incendiary glory, along with an alternate take, and the discography included in the booklet gives me some information I’ve always wanted: it was recorded at the Edgewood Recording Studio in Washington DC in 1961, and the drummer holding down that fantastic Latin rhythm for a very good studio band was one “TNT” Tribble Jr. I’m afraid I’d never heard of him, but I’m glad to know his name now.

Within these 52 tracks you’ll find jump blues, novelty blues, rock ‘n’ roll blues, Chicago-style blues, gospel blues and funky blues. There are some wonderful obscurities, including the philosophical “Talkin’ About Love”, recorded in Columbus, South Carolina for the True Spot label in 1966 or ’67. In 1968 he was in England, recording for Mike Vernon’s Blue Horizon label: two tracks, “It’s Hard But Fair” and “I Couldn’t Quit My Baby”, were cut with a British band including the saxophonists Steve Gregory, Johnny Almond and Bud Beadle, but the mix is messy and the playing lacks the punch of the best of the American recordings. There are also six tracks recorded in front of a New York audience in 1995 for the House of Blues radio show with a very good five-piece horns-and-rhythm band, in which Parker gets all the space he needs to show that he was a guitarist in the class of Albert and Freddie King and Albert Collins.

The CD case also reproduces the poster for an all-day dance in June 1957 at the Bluefield Auditorium in Bluefield, West Virginia, a coal town in the Appalachians. The bill included the Coasters, Ruth Brown, Bo Diddley, the Drifters, the 5 Satins, Smiley Lewis, the Schoolboys, Paul Williams & the Hucklebuck Orchestra, and “Mr Bobby Parker — Blues Guitar”. The compere was the singer Johnny Hartman. Admission $2.50. “Entire balcony reserved for white spectators,” it says.

* Bobby Parker’s Soul of the Blues is released on the Rhythm and Blues label. The photograph is from the booklet, which states that 50 per cent of the profits from the set will go to the Bobby Parker Foundation.

** In the first version of this piece, I got “TNT” Tribble Jr mixed up with his father, Thomas “TNT” Tribble Sr, also a drummer. Now corrected.