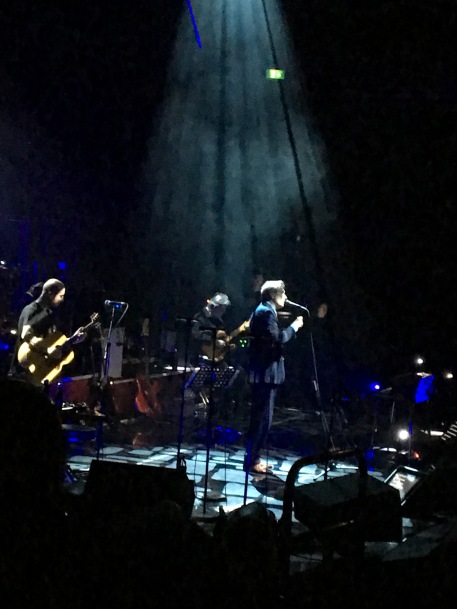 Only a month after writing about the release of Bryan Ferry’s 1974 Albert Hall concert, last night I found myself back in practically the exact same seat I occupied 46 years ago, watching Ferry, midway through the first of three concerts, step into a cone of light to deliver “Don’t Think Twice, It’s All Right” with just the guitars of Tom Vanstiphout (acoustic) and Chris Spedding (almost subliminal Telecaster) for company.

I thought about a recent conversation with my friend Caroline Boucher (once of Disc & Music Echo), who remarked on the extra-special quality of Ferry’s singing on his 2007 album of Dylan covers, Dylanesque. He’d recorded “Don’t Think Twice” five years earlier, on Frantic, accompanied by Colin Good’s piano. Last night’s version was very different: almost unbearably tender in execution and spirit, it formed a pair with the Dylan cover that followed it, “Make You Feel My Love” (which was on Dylanesque). When he launched the familiar roar of “Hard Rain” half an hour later, it was tempting to think of Ferry as the Bard of Hibbing’s most interesting interpreter.

“Don’t Think Twice” was the point at which the concert pivoted away from its opening sequence of a dozen non-hits into the drive towards the encores. Highlights of the first half for me were the unstoppable groove of “You Can Dance” (from Olympia), the slinkier seduction of “Your Painted Smile” (from Mamouna), and the glorious shifts from minor-key verse into the deceptively sunny Europop chorus of “Hiroshima” (from Frantic).

The second half was the formula beloved of Ferry’s wider audience: “Avalon” and “Dance Away”, “Love Is the Drug” and “Street Life”, “Hard Rain” and “The ‘In’ Crowd”, “Virginia Plain” — still a stunning piece of pop art, worthy of his mentor, Richard Hamilton — and “Editions of You”, all delivered with style and energy. Throughout, Ferry received exemplary support from his dozen musicians, notably Neil Jason on bass guitar, Luke Bullen on drums and Jorja Chalmers — Louise Brooks dressed as Catwoman — on various saxophones. If this was a last night out before the coronavirus shuts everything down, then it wasn’t a bad way to finish.