The state of things 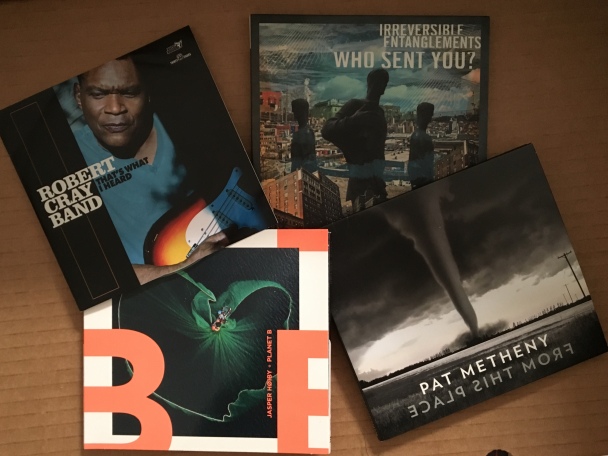 One characteristic of despotic governments is an urge to suppress or deride art that does not serve their own purpose; hence Hitler’s persecution of “degenerate art” and Stalin’s enthusiasm for socialist realism. We haven’t quite reached that stage, but the political role of artists of all kinds grows more important in times such as these. Here are four new recordings with something to say.

In his excellent new album, That’s What I Heard, Cray and his producer, Steve Jordan, explore a variety of approaches with great success (for example, there’s a gorgeous version of “You’ll Want Me Back”, which Curtis Mayfield wrote for Major Lance in 1966). But one track really stands out. On “This Man” he takes a standard blues trope — a stranger arrives in the singer’s home and tries to steal his woman — and turns it to a different use. The groove is down and funky, the mood ominous. “Who is this man in our house? / Who is this man? Better get him out! / We’ve got a problem, he’s gotta go / If he don’t leave, we can’t live here no more / If we want to save our home, better get him out.” Next verse: “When I come home from work, there he is again / Talkin’ loud, talkin’ trash, and it’s always something about him…” I don’t think it’s hard to identify the connection we’re being invited to make. The refrain goes “Get him out! Get him out! Get him out!” If songs could win elections…

2 Irreversible Entanglements: Who Sent You?

As well as being probably the finest solution yet devised to the eternal problem of how to blend jazz and poetry in a way that satisfies the requirement of both, Chicago’s Irreversible Entanglements are also a great protest band. Camae Ayewa — sometimes known as Moor Mother — rivals Matana Roberts as an eloquent writer and spellbinding declaimer of poetic texts. The musicians — Aquiles Navarro (trumpet), Keir Neuringer (alto saxophone), Luke Stewart (bass) and Tcheser Holmes (drums) — bring the open lines and flexible interplay of Ornette Coleman’s classic quartet and the explicit cultural grounding of Eddie Gale’s Ghetto Music into the 21st century. Who Sent You?, the collective’s second album, presents the coolly controlled sound of an angry and insurrectionary America that will not be silenced.

3 Pat Metheny: From This Place

With “This Is Not America”, co-written with Lyle Mays and David Bowie in 1985 for the movie The Falcon and the Snowman, Pat Metheny created a piece whose resonance has grown over the intervening three and a half decades, whether you’re listening to the original or to the version by Charlie Haden’s Liberation Music Orchestra on the album Not in My Name. The undertone of his latest album, even in its most lyrical moments, is one of disquiet. The oncoming twister pictured on the cover looms as the music begins with a long, complex, multi-sectioned piece called “America Undefined”. There is wonderful playing throughout by the pianist Gwilym Simcock, the drummer Antonio Sànchez and — particularly — the marvellous bassist Linda May Han Oh, against discreet and effective orchestral arrangements on some pieces. Grégoire Maret adds lovely harmonica, and the title track features Meshell Ndegeocello singing Alison Riley’s lyric: “From this place I cannot see / Heart is dark / Beneath rising seas…”

The Danish bassist and composer probably best known for his work with Phronesis assembles a different multinational trio to tackle climate change and related social issues. The British saxophonist Josh Arcoleo and the French drummer Marc Michel are more than ready for the challenge of the exposed format, helped by the inventiveness of Høiby’s compositions and his subtle use of electronics — and by the sparing inclusion of words spoken by thinkers including Ram Dass, Grace Lee Boggs, Charles Eisenstein and Jiddu Krishnamurti. Their speech is incorporated with the lightest of touches, providing a framework within which the music speaks in its own language. “If we could truly collaborate with our fellow man,” Ram Dass says, “there would be enough to go around for the world.” Music that relies on unselfish collaboration has much to teach tyrants, actual and would-be.

* The Robert Cray Band’s That’s What I Heard is on the Thirty Tigers label. They tour the UK from April 30 to May 16, starting in Bexhill-on-Sea. Irreversible Entanglements’ Who Sent You? is on IARC/Don Giovanni. They play the Corsica Studios, London on March 10. Pat Metheny’s From This Place is on Nonesuch. Jasper Høiby’s Planet B is on Edition Records.