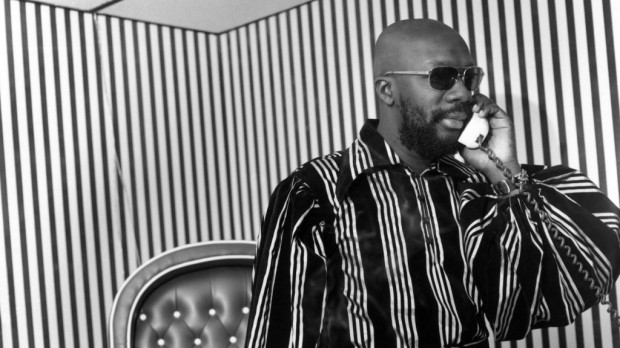 I wish I’d had longer to talk to Isaac Hayes back in January 1971, and that I’d been able to get him to talk in more detail about his childhood and his family background, which involved picking cotton and extreme poverty. That day in Memphis, in his extraordinary office in the Stax corporate HQ, white-hot from the success of Hot Buttered Soul and To Be Continued, sitting in a white egg-shaped chair suspended by a chain from the ceiling, he talked about his plans for the imminent recording of what would become Black Moses, the double album released at the end of that year, with its extraordinary cruciform fold-out cover art.

He talked about making it a big production, mentioning George Harrison’s All Things Must Pass as an inspiration and giving me the impression that it would be based on gospel music and spirituals. “But I’m going do it in a commercial fashion,” he explained. “I hope I haven’t waited too long to do it, because sometimes the trend changes so fast and I feel I can really get right to the roots of it. I know I can from recollecting my own experiences, from being in those small country churches that are no larger than this office, where people didn’t have no piano or anything, just feet on the floor. It’s so beautiful, man, and things like that are what I’m going to try and capture.”

I asked him if he’d heard work songs during his upbringing in Covington, a rural town outside Memphis. “Yeah, I can vaguely remember… I’m sure my grandmother would know them, because her mother was a slave. She tells me about those experiences. I used to sing spirituals in the rural areas of Mississippi and Tennessee and Arkansas. Also I started out playing blues. I used to play with a little blues band — I think it was Valentino and the Swing Cats, or something… I played a little tenor sax, and we’d play on a store porch sometimes. On Friday evenings, man, everybody’s coming in from the fields, they fry the fish here and they’re gambling there and selling corn liquor there and drinking wine right across the tracks. You know, one side of the tracks is white and the other is black. We’d play right out in the porches of the stores, those country blues. I’m going back to those places… I’ve been away from it so long. All this will help in putting this album together, because I’m not only going to include spirituals, I’m going to go the whole bit. It’ll be a picture.”

Well, Black Moses didn’t quite turn out like that. In some ways the strangest thing about Hayes’s career is that, having made his name as one of the great soul-music songwriting partnerships of the 1960s (with David Porter), once he became successful as an artist it was via other people’s songs: his protracted boudoir-friendly versions of pieces from the pens of superior pop song writers, in particular Jimmy Webb’s “By the Time I Get to Phoenix” and Bacharach and David’s “The Look of Love” and “Walk On By”. Such things, not gospel songs or spirituals, would be the basis of the double album he recorded between that March and October.

Hayes was a fascinating musician, and all his facets are displayed in The Spirit of Memphis 1962-76, a thoughtfully compiled and beautifully presented four-CD anthology of his material for the Stax family of labels. There’s a first CD containing 26 examples of his early work as a writer, producer and keyboard player for Stax, including tracks by Carla Thomas, Sam and Dave, Johnnie Taylor and William Bell, the highlights for me being Mable John’s “Your Real Good Thing”, the Soul Children’s “The Sweeter He Is” and, perhaps most of all, Judy Clay’s glorious “You Can’t Run Away From Your Heart”. The second disc has his own hit singles for Volt and Enterprise, including “Phoenix” and the theme from Shaft.

Half of the third disc (which opens with some of his cover versions) is devoted to a mostly unreleased set from an Operation PUSH concert in Chicago in 1972. He exposes his blues, R&B and gospel roots to tremendous effect in a great big-band version of “Stormy Monday”, an epic “If Loving You Is Wrong”, and a heartfelt voice and piano treatment of “His Eye Is on the Sparrow”, the gospel classic which Hayes says he heard his grandfather sing, his spoken introduction reprising some of the things he had said to me almost two years earlier.

The fourth disc throws together several fine and again mostly unreleased funk jams featuring his excellent band, the Movement, with Willie Hall on drums, James Alexander on bass, Sidney Kirk and Lester Snell on keys, and Michael Toles, Harold Beane and Skip Pitts on guitars. The 19-minute “Groove-a-thon” and the 33-minute version of “Do Your Thing”, expanded from the one heard on the Shaft soundtrack, remind us of the place Hayes’s music occupied alongside Norman Whitfield’s psych-soul and Miles Davis’s psych-jazz in an era when stretching out seemed to be the natural mode of musical life.