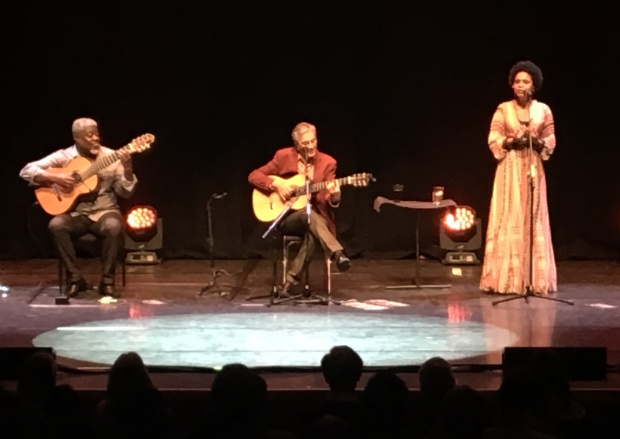 For two hours on Friday night, Caetano Veloso invited us into his living room. Well, the Barbican Hall, actually, but that’s how he made it seem. His guests were the singer Teresa Cristina and the guitarist Carlinhos Sete Cordas, who began the evening by performing songs from their recent album, a collection of duets on pieces by the late samba composer Angenor de Oliveira, better known as Cartola (the album is titled Canta Cartola).

Cristina sang with grace, controlled strength and great expressive power. Carlinhos (“Sete Cordas” refers, I imagine, to the seven strings on his guitar) was a revelation, embedding the vocal line in a fluid matrix of finger-picked detail featuring liquid runs, caressed chords and subtle bass figurations exploiting that extra string below the regular bottom E. I can’t remember hearing an acoustic guitar played with a lovelier and more natural tone — or with a more engaging smile.

When Caetano applauded them from the stage and took over, without a break, it was to present songs chosen, he said, so as not to repeat his regular repertoire. He had selected more obscure material, some of it from his earliest albums, recorded before his arrest by Brazil’s military government in 1968 and his subsequent period of exile in London. The exceptions were “Cucurrucucu Paloma”, familiar from its appearance in Pedro Almodóvar’s Talk to Her, and “London, London”, the charming song written during his enforced relocation.

Since my Portuguese extends no further than bom dia, muito obrigado, boa sorte and dois capirinhas, por favor, I can’t help but feel a sense of regret when I listen to Caetano, an understanding of his lyrics requiring the subsequent effort of seeking out translations. That small disappointment, however, is easily displaced by enjoyment of the elegant lines and structures of his melodies, and the marvellous qualities of his voice, its conversational tone covering great technique. And one of the sweetest sounds to be heard in any concert hall is that of a largely Brazilian audience gently singing his phrases back to him.

For the finale, he invited his friends to return for a set of encores in which he effortlessly meshed his voice with Cristina’s and his guitar with that of Carlinhos. Nobody wanted them to leave.