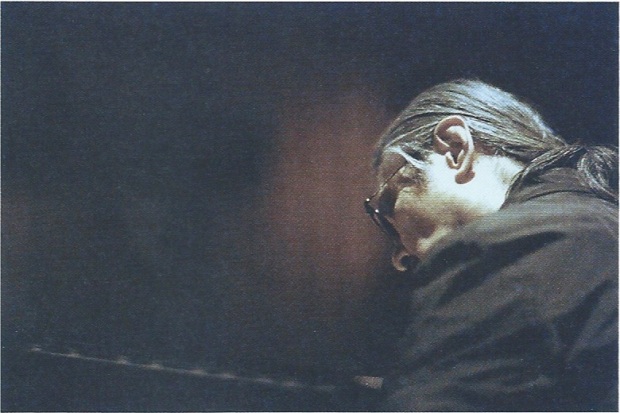 The pianist Masabumi Kikuchi died last year at the age of 75, mourned by those whose love of jazz is based, at least in part, on the way it offers a home to wandering spirits. It’s clear from the testimony of those who worked with Kikuchi that he wasn’t an easy person, either on himself or on others; his music was the product of an endless pilgrimage towards some sort of essence, some sort of truth, that could not be found in pretty surfaces or routine politeness.

A new solo piano album called Black Orpheus (ECM) is the product of a recital three years ago in Tokyo, his birthplace. Like his last trio album, Sunrise (2012), it reveals the ultimate success of his search: here is a musician who refused to rest until he had discovered his own true voice, his genuine originality.

The first time I saw Kikuchi was the early ’70s, in Gil Evans’s apartment in Westbeth, an artists’ housing co-op in the West Village. He was in the process of making what turned out to be a permanent move from Tokyo to New York, and Gil was acting as a kind of patron. The first time I heard him was when he turned up in London as one of the three keyboard players in the 13-piece band Evans brought to the Royal Festival Hall for his UK debut in 1978, an event that still looms large in the memory of those fortunate enough to have been present. Then I heard the trio records he made with Gary Peacock in Japan in the 1970s, where his personality started to become clear, and a couple of decades later came his memorable trio with Peacock and Paul Motian, which operated under the name Tethered Moon.

His playing grew more distilled as the years went by. All excesses were gradually pared away. In a short essay accompanying the new album, his fellow pianist Ethan Iverson recalls a note Kikuchi left for himself on a piano. “Play slower,” it said. “I sound better when I play slower.” You can hear the effect of that self-imposed ordinance throughout the new album, in the nine wholly improvised pieces and the original composition called “Little Abi”, but most of all in the piece that gives the album its title.

Black Orpheus, the film made by Marcel Camus in Brazil in 1959, won the Palme d’Or at the Cannes festival, and the Oscar, the Golden Globe and the BAFTA award for the best foreign or foreign-language film at the Oscar. It also introduced audiences to Brazilian culture. “Manhã de Carnaval”, the haunting and much-covered Luis Bonfa tune, is its theme.

In almost any hands, the song conveys that special blend of sunny optimism and underlying melancholy that made the first wave of bossa nova songs so appealing. Kikuchi does something different with it. He slows it down to the pace of his thoughts, dismantles its components and slowly reassembles them in new shapes, testing their outline and weight by shifting the voicing of the underlying harmonies and adjusting the trajectory of the familiar melodic fragments. There are many pauses, in which the reverberations of the preceding notes are allowed to hang and decay in their own time.

The result is an eight-minute piece of great poise, beauty and profundity. To know how hard he worked to achieve it, you need only listen to a version he recorded in 1994 and released on a Verve album titled After Hours: Solo Piano, on which the theme is not so closely interrogated and a relatively straightforward two-chord modal structure (with an Evansesque voicing) supports an improvisation which builds towards conventional climaxes. The later version soars to a different level altogether and I can pay no higher compliment than to say it recalls Cecil Taylor’s epic recasting of Richard Rodgers’ “This Nearly Was Mine” (from the 1960 album The World of Cecil Taylor), in which a sentimental little show tune was transformed into a modernist aria, setting the pattern for a certain deviant strand of jazz pianism.

I guess the biggest difference between the two pianists is that Taylor found his voice early on. It took Kikuchi decades of patient burrowing and tunnelling to reach the pitch of perfection he achieved in his final years, of which Black Orpheus — every piece of it, not just “Manhã de Carnaval” — surely represents a pinnacle.

* The photograph of Masabumi Kikuchi is taken from Black Orpheus and was taken by Abby Kikuchi.

Tags: Masabumi Kikuchi
From: Jazz
← The Necks at the Union Chapel
Trondheim Voices in Bremen →
5 Comments Post a comment