Chris Spedding at the 100 Club 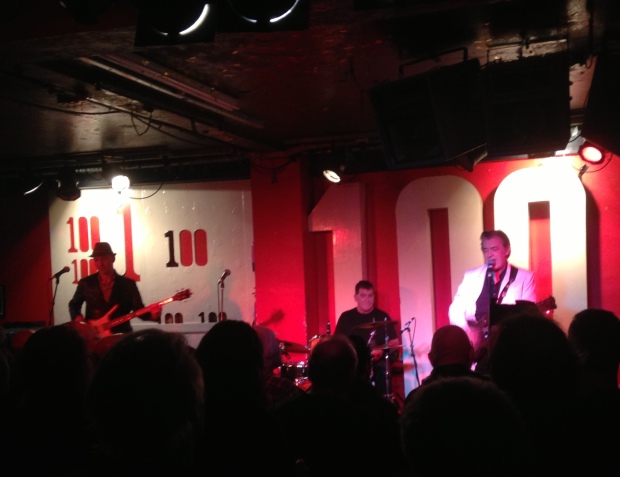 “The first time I played here, the stage was over there,” Chris Spedding said, pointing to his right. “Anyone else here old enough to remember that?” None of Saturday night’s audience at the 100 Club put their hands up, but you can bet there were one or two who qualified.

I certainly did. In fact the first time I saw Chris Spedding was at 100 Oxford Street — the address from which the club drew its name — on the evening of my first day working for the Melody Maker in London, in September 1969. He was a new addition to the Mike Westbrook band, a cool guitarist with floppy black hair surrounded by a crew of variously dishevelled free-jazzers. He was 24 then, and looked about 16. Now he’s 70 and looks 50.

Saturday night’s gig was arranged as a launch of Joyland, his thirteenth solo album, in which he appears with a bunch of guests. The cast list gives an idea of the range of Spedding’s activities over the years: the actor Ian McShane (narrating the title track), Arthur Brown, Bryan Ferry, Johnny Marr, Robert Gordon, Andy Fraser, Glen Matlock and others.

I can’t think of another musician whose career could have gone in so many directions. His early bands included Pete Brown’s Battered Ornaments, Ian Carr’s Nucleus, the Mike Gibbs Orchestra, the Jack Bruce Band and Sharks. Later he produced the Sex Pistols’ first demos, backed John Cale and Johnny Hallyday, and guested with the reformed Roxy Music. He was on Jeff Wayne’s War of the Worlds and appeared on Top of the Pops as a Womble, in costume. His playing that night with Mike Westbrook 45 years ago suggested that he might have an important part to play in the evolution of jazz guitar, in parallel with Sonny Sharrock and Derek Bailey. But when he had a hit single, it was with “Motorbikin'”, as traditional a slice of rock ‘n’ roll as you could find.

Saturday’s gig contained only one song from Joyland: “Message for Stella”, on which he was joined by the album’s co-producer: Steve Parsons, the elfin character known as Mr Snips in the days when they co-led Sharks. Back in the summer of 1974 Snips and Spedding asked me to produce their third album, but the band was already starting to disintegrate and I didn’t have the skills to hold them together during a series of fretful nights at Olympic Studios in Barnes. It was good to see Steve for the first time since then, his huge reserves of energy and enthusiasm intact: a proper English lead singer, ’70s-style.

For the rest of the set we heard Spedding with Malcolm Bruce — son of the late Jack — on bass guitar and Chris Page on drums, both of whom are members of Sons of Cream. The stripped-down trio lineup allowed plenty of room for the leader to demonstrate his mastery of an interesting custom-built guitar which looked like a Les Paul made out of distressed carbon-fire mesh, put through an old Fender amp, with no effects pedals and no bullshit involved.

Spedding always seemed to me a modest man, devoid of the rampant ego that distinguishes most guitar heroes. He never shows off but there’s always something worth hearing, often half-hidden in the folds and creases of the songs: a little train riff dying away on the fade of “Hey Porter”, or the pretty passing chords he inserted in the chorus of an otherwise straight reading of “Summertime Blues”. The most striking of the cover versions was a radically syncopated version of “Rip It Up”, and elsewhere he put the lightest of spin on classic rockabilly and rock ‘n’ roll guitar stylings. His performance of the anthemic “Motorbikin'” sent a couple of leathered-up Ace Café types in the front row into ecstasies.

The new album is a different thing altogether, a potpourri of pop styles and ambiances, from a great spaghetti western instrumental with Johnny Marr (“Heisenberg”) to a subtle Lana Del Rey-style noir ballad called “I’m Your Sin”, performed with a new female singer from Los Angeles called Lane. He gets Ferry to whisper-croon a spooky unreleased Erasers song called “Gun Shaft City”, and there’s a version of Crispian St Peters’ “The Pied Piper”, with Andy Mackay on oboe and saxophones, that brings out the song’s inherent creepiness. “Shock Treatment”, with Andy Fraser on bass, has a great Parsons lyric — “Shame, shame, such adolescent behaviour / Listenin’ to the B-52s sure ain’t gonna save yer” — and the closing “Boom Shakka Boom” is distinguished by a greasy-quiffed guitar-and-bass sound that defines a certain kind of unreconstructed rock ‘n’ roll.

Like Spedding’s entire career, the record slides all over the place without making a permanent landing anywhere, and is the more interesting for that. When the stage moves, he moves with it, while remaining himself. He was always something different, and he still is.