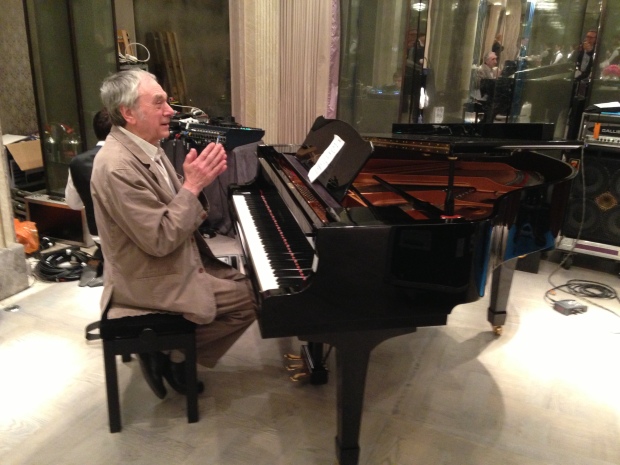 The French pianist René Urtreger, who celebrates his 80th birthday next month, was a member of the Miles Davis Quintet that recorded the celebrated soundtrack to Louis Malle’s Lift to the Scaffold in 1957. He had become a frequent collaborator with Lester Young, Chet Baker, Sonny Rollins, Stan Getz and many others during an era when his native Paris provided American jazz musicians with a warm welcome. Until now, however, his only appearance in Britain had been in the 1970s, when he visited London in his rather different capacity as Sacha Distel’s musical director.

Last night he and the other members of his trio — the bassist Yves Torchinsky and the drummer Eric Dervieu — performed in a small downstairs ballroom at the Connaught Hotel in Mayfair. They were playing to celebrate the opening of a new show, at the Timothy Taylor Gallery in Carlos Place, next door to the hotel, by the abstract expressionist painter Sean Scully, who was born in Dublin and brought up in South London, and now lives in New York and Bavaria. The centrepiece of the exhibition is a work titled Kind of Red, inspired by Miles Davis’s Kind of Blue: a series of five large paintings, in oil on aluminium, conceived as a single unit (you can see them on the gallery’s website, here).

Given the nature of the work’s origin, and Scully’s love of music (as a teenager he ran a blues club over a pub in Bromley High Street, and later named one of his paintings after John Coltrane’s “Dakar”), Timothy Taylor wanted something special to provide an unusual end to the conventional sequence of a private view followed by a small dinner. It seemed right to call on someone with a connection to the inspiration behind the paintings. The way Miles went about recording the music for Lift to the Scaffold — in particular the paring away of harmonic material — exerted a profound influence, two years later, on the concept of Kind of Blue. And Urtreger is now the only surviving member of the group that recorded the soundtrack to Malle’s noir classic.

His story is a fascinating one, revealed in an extensive interview with Pascal Anquetil in last January’s issue of the French monthly Jazz Magazine/Jazzman. To me the most striking single detail was his account of how, having waited day after day as an 11-year-old at the Gare de l’Est for the return of his Polish-Jewish mother, deported by the Nazis, only to discover that she had perished in the gas chambers at Auschwitz, he responded a handful of years later to the discovery of bebop: a music without overt sentiment.

But not, of course, without feeling, as we discovered last night in his fluent, thoughtful versions of “Old Devil Moon”, “So What”, “The Duke” and a handful of bop themes. “I suffered during my youth from a shyness that led me to imagine that I wasn’t at the same level as my (musical) partners,” he told Anquetil. “Today, that’s over. I’ve reached an age at which I have nothing to prove, and everything to give.” Last night’s audience, in which gallerists and collectors were joined by Bryan Ferry (like Scully, a former art student in Newcastle) and several of the painter’s friends, including the former champion boxer Barry McGuigan and the poet Kelly Grovier, accepted the gift with warmth and gratitude.

* The photograph of René Urtreger was taking during the sound-check at the Connaught. His most recent solo piano album, Tentatives (Minium, 2006), is highly recommended, and there will be a new album by the trio this summer. The Kind of Red exhibition opens today, June 11, and is on show until July 12 at 15 Carlos Place, London W1. The catalogue is published by the Timothy Taylor Gallery.