Jim Godbolt has the last word 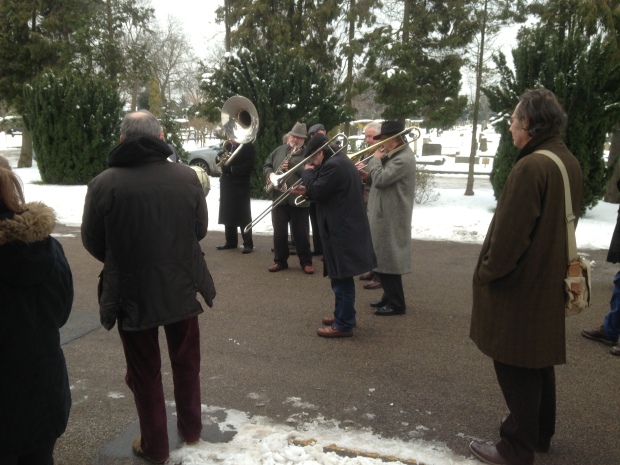 Jim Godbolt’s funeral took place on a winter’s day in Finchley, north London, last year. A group of old friends lugged their instruments through the snow to give him a proper British jazz enthusiasts’ version of a New Orleans send-off. Goldbolt was a British jazz enthusiast of the early type, his characteristic responses formed by the wider world’s dismissal of the music he loved. Those whose encounters with him never got beyond the superficial tended not to see below the sardonic, suspicious surface.

His two-volume History of Jazz in Britain (1919-1950 and 1950-70) is invaluable. But it was through his two works of semi-authobiography, All This and 10 Per Cent (1976) and All This and Many a Dog (1986), that he gave us an amusing and perceptive account of a jazz fan’s precarious life on the music’s margins, where he functioned as a promoter, manager, booker, writer and editor. So precarious, in fact, that he had a spell reading meters for the gas board. In one of his books he created a character whom he described as “a snarling anti-social inverted snob with a chip on his shoulder”; it was, he later admitted, a self-portrait.

He was 90 when he died. We’d had our disagreements now and then and I suppose I’d always thought of him, in the phrase used by moderns to disparage traditionalists, as a bit of a mouldy fygge. But he wasn’t, really. He just liked what he liked and had got used to mounting a sort of passive-aggressive defence of it. And he managed to edit the house magazine of Ronnie Scott’s with distinction for more than a quarter of a century, a job that required him to engage with the sort of modern stuff heard in the club. His diary pieces were a kind of jazz version of a cross between J.B. Morton (“Beachcomber” of the Daily Express) and Michael Wharton (“Peter Simple” of the Daily Telegraph), which means they were full of fantastical invention, characterised by an ingrained pedantry and a deep scepticism directed at anything remotely fashionable. Like their author, they were cranky and sometimes infuriating but often very funny.

Now his final memoir, titled All This and Slowly Deteriorating Fast, has been issued by Proper Records in an interesting hybrid format: a 240-page book shaped like a CD, with a disc of some of Godbolt’s favourites (from Bogus Ben Covington via George Webb’s Dixielanders and Mick Mulligan’s Magnolia Jazz Band to an excerpt from Ellington’s Nutcracker Suite). In the text he revisits some of the episodes covered in the earlier volumes, from the perspective of a man who knows that he is closer to the end than to the beginning, but the elegiac tone is spiced with typical tartness. There is a substantial amount of elaborate score-settling, much of it savagely amusing: “My enemy had a heart transplant operation, at which one normally shows sympathy, but in this case my concern was more for the doctor than the patient as he must have had a hell of a time looking for the afflicted organ.”

I suppose Godbolt was one of the last of a breed of British jazz fan whose deep and enduring allegiance to the music was formed at a time when it was at best patronised and at worst despised by the arbiters of culture. Those of us who came along later will never know quite how that felt.