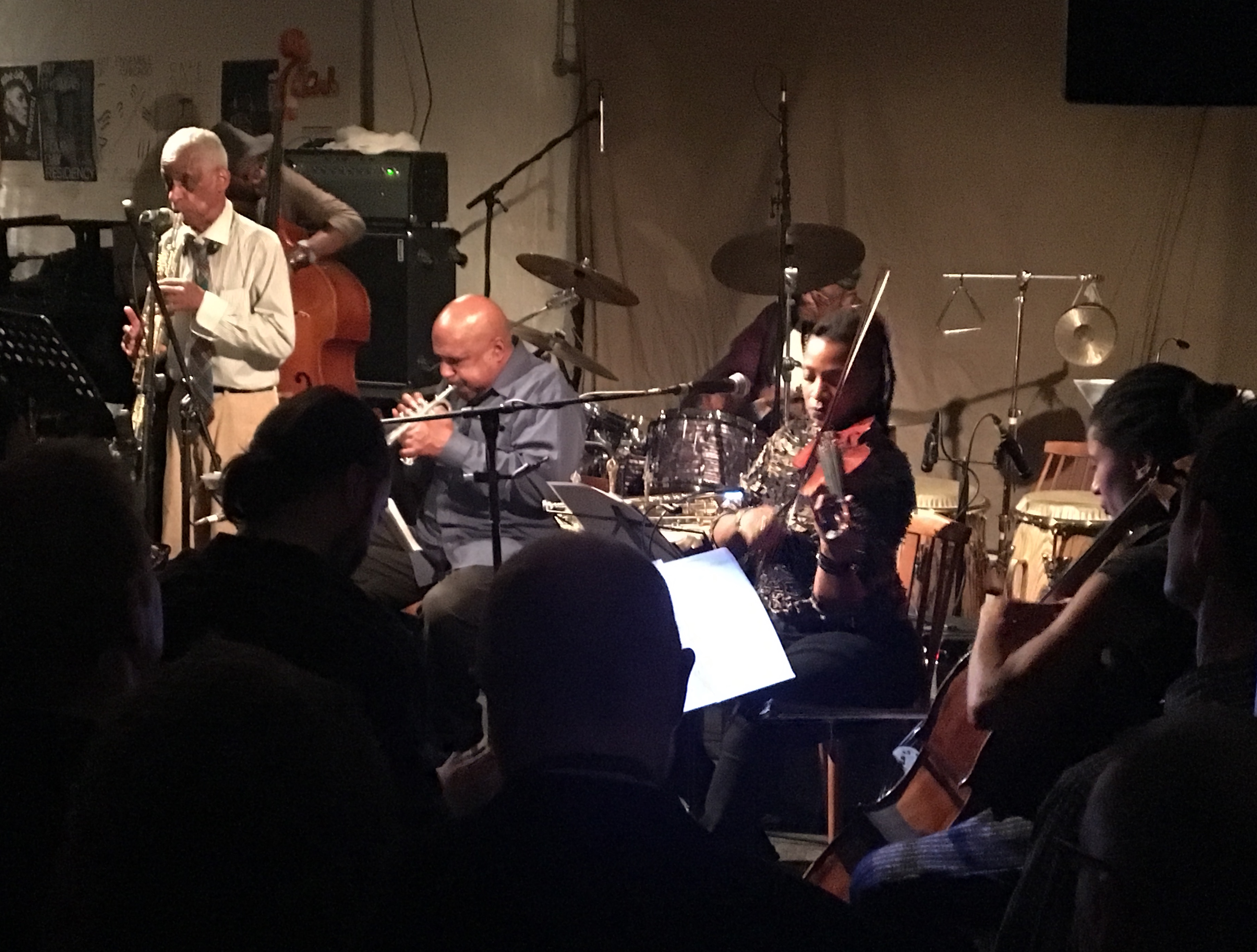 Amid the strangest weather in 30 years, with sand from the Sahara and dust from Iberian wildfires turning the air in London dark red at lunchtime on the hottest October 16th since records were first kept, there was another surprise awaiting the audience for the second of the Art Ensemble of Chicago’s three sold-out nights at Cafe Oto this week.

We had bought tickets expecting the regular four-piece line-up of the current AEC: co-founder Roscoe Mitchell (saxophones) and long-time member Famoudou Don Moye (drums and percussion) plus trumpeter Hugh Ragin and double bassist Junius Paul. What we encountered was the band extended to a septet by the presence of Mazz Swift (violin and vocals), Tomeka Reid (cello) and Silvia Bolognesi (double bass, the only one not visible in the photograph above). It was a special treat.

As you would expect, the unbroken 80-minute performance was a mixture of the prepared and the spontaneous, moving easily through contrasting ensemble passages which gave way to solos from each of the participants. The extra string players never felt like a bolt-on extra: they were fully integrated into the ensemble, playing equal roles in the composed passages, in the textured backgrounds and in the long, boilingly intense collective improvisation which prefaced the sign-off with the familiar descending cadences of “Odwalla”.

Mitchell played an astonishing sopranino solo during which he manipulated rapid sequences of harsh cries against a sustained whistling sound. Ragin alternated between regular and pocket trumpets, four-valve cornet and flugelhorn with unfailing relevance. Paul’s wonderfully emotional solo and his fast walking 4/4 with Moye in one passage evoked the spirit of the late Malachi Favors. On the opposite side of the stage, Bolognesi responded with an improvisation making energetic use of the bow. Swift sang with restrained warmth and she and Reid both left, in their solos and in the ensemble, the impression of instrumentalists of great character and inventiveness, virtuosos of unorthodox techniques and startling effects that contributed to the overall scheme. Throughout the set Moye reminded us of what wonderfully subtle and propulsive drummer he is.

The two sustained standing ovations that greeted the end of the set and the brief hymn-like encore were the equal of anything I’ve heard at Cafe Oto. It was an unforgettable end to a day marked by natural wonders.