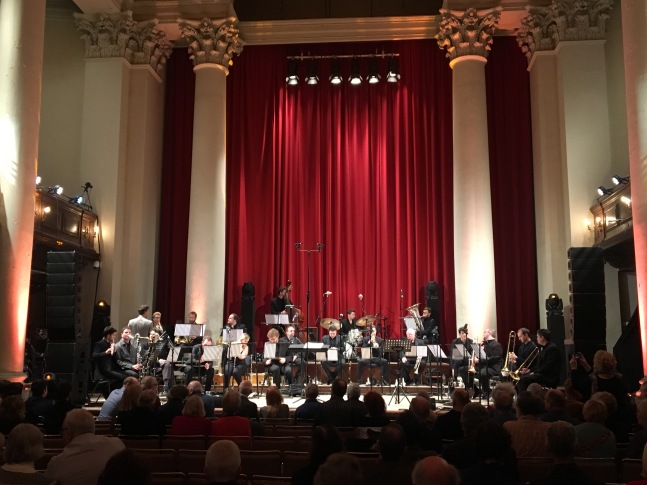 As he surveyed the ranks of musicians preparing to play Gil Evans’s score for Porgy and Bess at St John’s, Smith Square last night, Nick Smart knew that he had everything he needed: a 21-piece orchestra including the correct complement of French horns (three), bass clarinets (three), flutes of various sizes (four, when necessary), and a quartet of wonderful trumpeters — Henry Lowther, Martin Shaw, Steve Fishwick and Freddie Gavita — prepared to hand around the role of soloist. Since that soloist was, of course, Miles Davis, the task facing the four men was not without its challenge.

Smart also had the benefit of dealing with Evans’s actual score. As John Billett, the concert’s promoter, pointed out in his introduction, even the best intentioned reproductions of Evans’s pieces for Davis have been forced to make do with transcribed versions which inevitably miss some of the infinite subtlety of the original orchestrations. Thanks to the Evans family’s generosity, last night’s orchestra — consisting of alumni of the Royal Academy of Music, where Smart is in charge of the jazz programme — were able to work from the notes as Gil wrote them.

Of the three much loved albums Davis and Evans recorded together between 1957 and 1960, Porgy and Bess may be the most ambitious and fully realised, the pinnacle of the highly original approach to large-ensemble music that the arranger had been developing since his days with the Claude Thornhill band in the 1940s. Sixty years later, the richness and variety of gesture Evans applied to George Gershwin’s show tunes remain a source of wonder. And it can only be said that, under Smart’s direction, last night’s ensemble did the score complete justice in both execution and spirit.

To watch and listen as the ensemble brought Evans’s unorthodox instrumental deployments and love of dynamic contrast to life was a delight, from the whispered accompaniment of the French horns behind the trumpet solo on “It Ain’t Necessarily So” to the sudden brassy flares of “Prayer”. To hear each trumpet soloist pay the proper homage to Davis without forfeiting his own character was enormously impressive (and I’m not going to compare them: they were all outstanding). To admire the way Jeremy Brown coped with the bass lines written for Paul Chambers and the restrained panache with which Ed Richardson attacked the drum parts played in the studio by Philly Joe Jones and Jimmy Cobb was hugely impressive. Nor can one forget the trumpeter who didn’t solo: George Hogg, who played Ernie Royal’s lead parts with perfectly judged power and precision.

The nave of St John’s was packed for the occasion. The sessions for the original album took place in Columbia Records’ studio on East 30th Street in New York City, in a deconsecrated Armenian Orthodox church whose dimensions created a famously perfect natural reverberation. Apart from a hum that briefly emerged late in the set, the amplified sound in the former Anglican church in Westminster, built in 1728, severely damaged in the war and then restored as a concert hall, was equally sumptuous, revealing all the fine detail of the scoring.

This was the last night of the EFG London Jazz Festival, and earlier in the evening the pianist Chris Ingham had led a sextet through downscaled versions of pieces from Miles Ahead, the first of the three Davis/Evans albums. They included “Blues for Pablo”, “New Rhumba”, “Maids of Cadiz”, and a rearrangement of “The Duke” on which the combo managed to sound like a big band, and there was also a lively account of “Boplicity”, an earlier Evans arrangement for Davis’s 1948 Birth of the Cool nonet. Paul Higgs played the Miles parts on trumpet and flugelhorn with great finesse, flanked by two outstanding saxophonists, Jamie O’Donnell on alto and Colin Watling on tenor.

A long relationship with the music that Gil Evans and Miles Davis made together a lifetime ago tends to create an unusually strong emotional bond. Probably the greatest tribute that can be paid to the evening at St John’s is that the listener emerged with that bond not only confirmed but strengthened. Congratulations, then, to everyone involved in a sublime experience.